The cuckoos are a family of near-passerine birds. They are the main part of the order called Cuculiformes. The family is famous for its "nest-parasite" members, but has a range of other types of bird. The cuckoo family, in addition to those species named as such, also includes the roadrunners, koels, malkohas, couas, coucals and anis.

The family is notable for its subfamily, the Cuculinae. Many of them have a unique kind of parasitism called brood parasitism. This means it lays its eggs in the nests of other kinds of birds, who then rear the baby cuckoo instead of their own.

The common cuckoo, Cuculus canorus, (usually just called “cuckoo” in countries where it lives) is a spring migrant to Europe and northern Asia. It winters in Africa and southern Asia. It is a greyish bird with a slender body, long tail and strong legs. It looks a little bit like a small bird of prey when it flies. The male is dark grey above with a blackish brown tail, spotted and tipped with white and unevenly barred in black. The female is similar but a bit more reddish on the upper breast. It likes to eat hairy caterpillars. It is often found where woods border on to open land.

The cuckoo gets its names because the male Common Cuckoo sings two notes which sound like the word “cu – ckoo”. The female does not make this sound. She has a loud bubbling call. 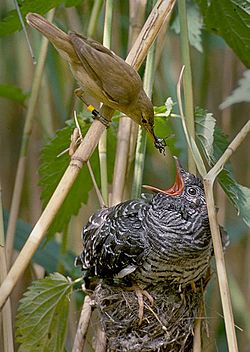 The common cuckoo does not make a nest of its own, and they do not bring up their own young. Instead, the female lays her eggs in the nests of other birds. Each female cuckoo specialises in just one host species, and lays camouflaged eggs in that bird's nest. For example, a cuckoo which lays its eggs in reed warbler nests will lay eggs that look like those of a reed warbler.

The female cuckoo spends a lot of time watching the birds at the nest where she wants to lay an egg. She has to work out the exact time to go and lay her egg while the 'host' parents are not looking. If the cuckoo lays her egg in the nest before the other bird lays, the reed warbler will notice and knows it is not her egg, and so she will get rid of it. If the cuckoo lays her egg too late, when the reed warbler has finished laying, this will be noticed, too.

When the female cuckoo thinks it is the right moment she will fly down to the reed warblers' nest, pushes one reed warbler egg out of the nest, lays her egg and flies off. This only takes about 10 seconds. The reed warbler does not notice, and carries on looking after the eggs. When the cuckoo chick hatches it soon grows very fast. It pushes the other eggs or reed warbler chicks out of the nest. At 14 days old, it is about 3 times the size of the adult reed warblers. The chick has a huge mouth which it opens very wide. It also makes a very fast “cheeping” sound which sounds like a nest full of reed warbler chicks. This makes the parents behave as if they had a nest full of their own chicks.

About 56 of the Old World and 3 of the New World cuckoo species are brood parasites, laying their eggs in the nests of other birds. These species are obligate brood parasites, meaning that they only reproduce in this fashion. The shells of the eggs of brood-parasites is thick. They have two distinct layers with an outer chalky layer that is believed to provide resistance to cracking when the eggs are dropped in the host nest.

Female parasitic cuckoos specialize and lay eggs which look like the eggs of their chosen host. This has been produced by natural selection, as some birds are able to distinguish cuckoo eggs from their own, leading to those eggs least like the host's being thrown out of the nest.

Host species may take direct action to stop cuckoos laying eggs in their nest. Birds whose nests are at high risk of cuckoo-eggs often mob cuckoos and drive them out of the area.

Genes regulating egg colour are passed down only along the maternal line, no doubt on the sex chromosome. This allows females to lay mimetic eggs in the nest of their host species.

Females are thought to imprint on the host species which raised them; later they only parasitize nests of that species. Male cuckoos fertilize females of all lines, so gene flow takes place between the different maternal lines.

The detail and near-perfection of the cuckoo nest parasitism, and the defences of the host birds, are extraordinary. Many of the host species can spot and throw out almost perfect cuckoo eggs. This system is a fine example of an evolutionary arms race, a type of co-evolution. There are other birds which practise nest parasitism (such as the cowbirds) but these other systems are much less specialized. 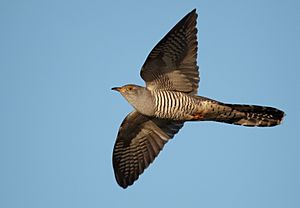 The males and grey females in flight look a bit like a sparrowhawk. That may protect them from other birds' mobbing (Batesian mimicry). The advantage of the rufous-coloured females is not known. It may be that, being less common, they are less recognised by other bird species.

The cuckoo only stays in its summer location for about 10 weeks. In Britain, for example, it arrives in April and the adults start for Africa by the end of June or early July. They arrive in Africa (or Asia) in August.

They moult twice a year, changing feathers partially in summer, and completely in winter.

All content from Kiddle encyclopedia articles (including the article images and facts) can be freely used under Attribution-ShareAlike license, unless stated otherwise. Cite this article:
Cuckoo Facts for Kids. Kiddle Encyclopedia.