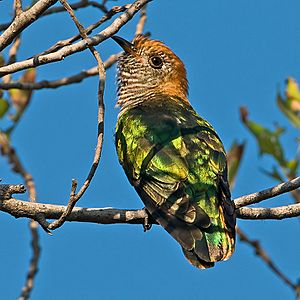 The Asian emerald cuckoo is a species of cuckoo in the Cuculidae family.

This bird is not in the Cuculinae subfamily, and so it is not a nest parasite. They raise their own young, like most birds. Emerald cuckoos lay eggs in a nest built by the parents. 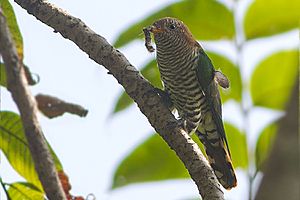 The Asian emerald cuckoo grows to a length of about 18 cm (7 in). The adult male has an iridescent dark green head, upper parts and upper breast, a white lower breast and a green barred belly. Bare skin round the eye is orange and the beak is orange/yellow tipped with black. The adult female has coppery-green upper parts, rusty brown crown and nape and green-barred underparts. Both sexes show a white band on the underwing when in flight. The underparts of the juvenile male lack the white lower breast and are more heavily barred. The voice is a “chweek” uttered while flying, and various whistled twitters.

All content from Kiddle encyclopedia articles (including the article images and facts) can be freely used under Attribution-ShareAlike license, unless stated otherwise. Cite this article:
Asian emerald cuckoo Facts for Kids. Kiddle Encyclopedia.