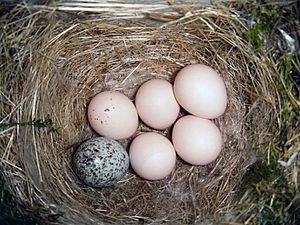 Cowbirds are birds of the genus Molothrus. They are brood parasites, similar in life-style to the Cuckoo. The entire family Icteridae is limited to the New World.

They lay their eggs in the nests of other birds. The birds whose nest is used by the cowbird is tricked into raising the young cowbirds.

These birds feed on insects, including those stirred up by cattle. They lay their eggs in other birds' nests. This means that the birds can more easily stay with the herd.

The Brown-headed Cowbird has over 220 hosts. The other cowbird species have fewer known hosts, but all the species are generalists when it comes to choosing a host. This means that the eggs may look very different from the hosts' eggs.

It seems that Brown-headed Cowbirds periodically check on their eggs and young after they have deposited them. Removal of the parasitic egg may trigger a retaliatory reaction termed 'mafia behaviour'. Cowbirds may penalise hosts which remove the cowbird egg: they often destroy the eggs or nestlings of those hosts.

"Central to the persistence of mafia-type behavior in brood parasites and acceptance in hosts is the fact that hosts produce significantly more offspring by accepting parasitism rather than ejecting parasitic eggs".

All content from Kiddle encyclopedia articles (including the article images and facts) can be freely used under Attribution-ShareAlike license, unless stated otherwise. Cite this article:
Cowbird Facts for Kids. Kiddle Encyclopedia.