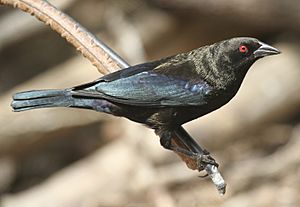 The bronzed cowbird (once known as the red-eyed cowbird), (Molothrus aeneus), is a small icterid.

It breeds from the southern U.S. states of California, Arizona, New Mexico, Texas, and Louisiana south through Central America to Panama. They tend to be found in farmland, brush, and feedlots. Outside the breeding season, they are found in very open habitats, and roost in thick woods. They forage in open areas, often nearby cattle in pastures. Their diet mostly consists of seeds and insects, along with snails during breeding season for a calcium source. There are three subspecies:

The bronze-brown cowbird, which restricted to the Caribbean coast of Colombia, was formerly considered to be an isolated population of this species.

Like all cowbirds, this bird is an obligate brood parasite; it lays its eggs in the nests of other birds. The young cowbird is fed by the host parents at the expense of their own young. Hosts include Prevost's ground-sparrow and White-naped brush finch. They develop rapidly, leaving the nest after 10–12 days.

All content from Kiddle encyclopedia articles (including the article images and facts) can be freely used under Attribution-ShareAlike license, unless stated otherwise. Cite this article:
Bronzed cowbird Facts for Kids. Kiddle Encyclopedia.