The European magpie (Pica pica) is a bird that lives in Europe, much of Asia, and northwest Africa. It is one of several birds in the crow family named as magpies.

In Europe, "magpie" is used by English speakers to call the European magpie; it is the only magpie in Europe outside the Iberian Peninsula. 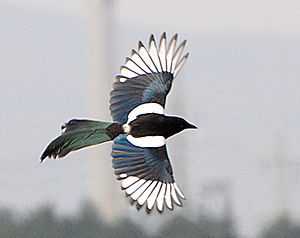 The adult male of the nominate subspecies, P. p. pica, is 44–46 cm (17–18 in) in length, of which more than half is the tail. The wingspan is 52–62 cm (20–24 in). The head, neck and breast are glossy black with a metallic green and violet sheen; the belly and scapulars (shoulder feathers) are pure white; the wings are black glossed with green or purple, and the primaries have white inner webs, conspicuous when the wing is open. The graduated tail is black, glossed with green and reddish purple. The legs and bill are black; the iris is dark brown. The plumage of the sexes is similar but females are slightly smaller. The tail feathers of both sexes are quite long, about 12-28 cm long. Males of the nominate subspecies weigh 210–272 g (7.4–9.6 oz) while females weigh 182–214 g (6.4–7.5 oz). The young resemble the adults, but are at first without much of the gloss on the sooty plumage. The young have the malar region pink, and somewhat clear eyes. The tail is much shorter than the adults.

The subspecies differ in their size, the amount of white on their plumage and the colour of the gloss on their black feathers. The northwest African race P. p. mauritanica differs from the nominate subspecies in having a patch of blue bare skin behind the eye, no white patch on the rump, and a longer tail. The southwest Arabian race P. p. asirensis differs in having more black in the plumage with a narrower white scapular patch, no white rump, and smaller white areas on the primaries. The Asian race P. p. bactriana has more extensive white on the primaries and a prominent white rump.

Adults undergo an annual complete moult after breeding. Moult begins in June or July and ends in September or October. The primary flight feathers are replaced over a period of three months. Juvenile birds undergo a partial moult beginning about one month later than the adult birds in which their body feathers are replaced but not those of the wings or the tail.

Eurasian magpies have a well-known call. It is a choking chatter "chac-chac" or a repetitive "chac-chac-chac-chac". The young also emit the previous call, although they also emit an acute call similar to a "Uik Uik", which may resemble the barking of a small dog. Both adults and young can emit a kind of hiss barely noticeable from afar

The range of the magpie extends across temperate Eurasia from Spain and Ireland in the west to the Kamchatka Peninsula and Taiwan in the east. There are also populations in northwest Africa and on Mediterranean islands. The species has been introduced in Japan on the island of Kyushu.

The preferred habit is open countryside with scattered trees and magpies are normally absent from treeless areas and dense forests. They sometimes breed at high densities in suburban settings such as parks and gardens. They can often be found close to the centre of cities.

Magpies are normally sedentary and spend winters close to their nesting territories but birds living near the northern limit of their range in Sweden, Finland and Russia can move south in harsh weather. 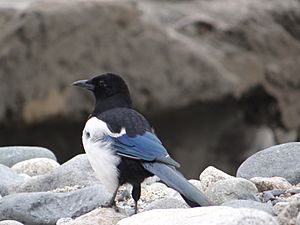 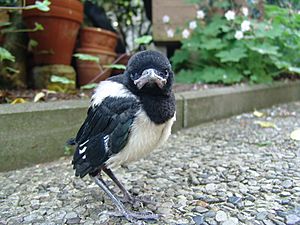 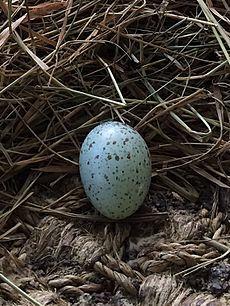 Some magpies breed after their first year while others remain in the non-breeding flocks and first breed in their second year. They are monogamous and the pairs often remain together from one breeding season to the next. They generally occupy the same territory on successive years.

Mating takes place in spring. In the courtship display males rapidly raise and depress their head feathers, uplift, open and close their tails like fans, and call in soft tones quite distinct from their usual chatter. The loose feathers of the flanks are brought over the primaries, and the shoulder patch is spread so the white is conspicuous, presumably to attract females. Short buoyant flights and chases follow.

Magpies prefer tall trees for their bulky nest, firmly attaching them to a central fork in the upper branches. A framework of the sticks is cemented with earth and clay, and a lining of the same is covered with fine roots. Above is a stout though loosely built dome of prickly branches with a single well-concealed entrance. These huge nests are conspicuous when the leaves fall. Where trees are scarce, though even in well-wooded country, nests are at times built in bushes and hedgerows.

In Europe, clutches are typically laid in April, and usually contain five or six eggs but clutches with as few as three and as many as ten have been recorded. The eggs are laid in early morning usually at daily intervals. On average the eggs of the nominate species measure 32.9 mm × 23 mm (1.30 in × 0.91 in) and weigh 9.9 g (0.35 oz). Small for the size of the bird, they are typically pale blue-green with close specks and spots of olive brown, but show much variation in ground and marking. The eggs are incubated for 21–22 days by the female who is fed on the nest by the male. The chicks are altricial, hatching nearly naked with closed eyes. They are brooded by the female for the first 5–10 days and fed by both parents. Initially the parents eat the faecal sacs of the nestlings but as the chicks grow larger they defecate on the edge of the nest. The nestlings open their eyes 7 to 8 days after hatching. Their body feathers start to appear after around 8 days and the primary wing feathers after 10 days. For several days before they are ready to leave the nest the chicks clamber around the nearby branches. They fledge at around 27 days. The parents then continue to feed the chicks for several more weeks. They also protect the chicks from predators as their ability to fly is poor making them very vulnerable. On average only 3 or 4 chicks survive to fledge successfully. Some nests are lost to predators but an important factor causing nestling mortality is starvation. Magpie eggs hatch asynchronously and if the parents have difficulty finding sufficient food the last chicks to hatch are unlikely to survive. Only a single brood is reared unless disaster overtakes the first clutch.

A study conducted near Sheffield in Britain using birds with coloured rings on their legs found that only 22% of fledglings survived their first year. For subsequent years the survival rate for the adult birds was 69% implying that for those birds that survive the first year the average total lifespan was 3.7 years. The maximum age recorded for a magpie is 21 years and 8 months for a bird from near Coventry in England that was ringed in 1925 and shot in 1947.

The Eurasian magpie is believed not only to be among the smartest of birds but among the most intelligent of all animals. Along with the jackdaw, the Eurasian magpie's nidopallium is approximately the same relative size as those in chimpanzees and humans, significantly larger than the gibbon's. Like other corvids, such as ravens and crows, their total brain-to-body mass ratio is equal to most great apes' and cetaceans'. A 2004 review suggests that the intelligence of the corvid family to which the Eurasian magpie belongs is equivalent to that of great apes (chimpanzees, orangutans, and gorillas) in terms of social cognition, causal reasoning, flexibility, imagination, and prospection.

Magpies have been observed engaging in elaborate social rituals, possibly including the expression of grief. Mirror self-recognition has been demonstrated in European magpies, making them one of but a few species and the only non-mammal known to possess this capability. The cognitive abilities of the Eurasian magpie are regarded as evidence that intelligence evolved independently in both corvids and primates. This is indicated by tool use, an ability to hide and store food across seasons, episodic memory, using their own experience to predict the behavior of conspecifics. Another behavior exhibiting intelligence is cutting their food in correctly sized proportions for the size of their young. In captivity, magpies have been observed counting up to get food, imitating human voices, and regularly using tools to clean their own cages. In the wild, they organise themselves into gangs and use complex strategies[examples needed] hunting other birds and when confronted by predators.

Marc Bekoff, at the University of Colorado, argues that Eurasian magpies are capable of feeling complex emotions, including grief.

In Europe, magpies have been historically demonized by humans, mainly as a result of superstition and myth. The bird has found itself in this situation mainly by association, says Steve Roud: "Large blackbirds, like crows and ravens, are viewed as evil in British folklore and white birds are viewed as good". In European folklore, the magpie is associated with a number of superstitions surrounding its reputation as an omen of ill fortune. In the 19th century book, A Guide to the Scientific Knowledge of Things Familiar, a proverb concerning magpies is recited: "A single magpie in spring, foul weather will bring". The book further explains that this superstition arises from the habits of pairs of magpies to forage together only when the weather is fine. In Scotland, a magpie near the window of the house is said to foretell death.

In Britain and Ireland, a widespread traditional rhyme, One for Sorrow, records the myth (it is not clear whether it has been seriously believed) that seeing magpies predicts the future, depending on how many are seen. There are many regional variations on the rhyme, which means that it is impossible to give a definitive version. 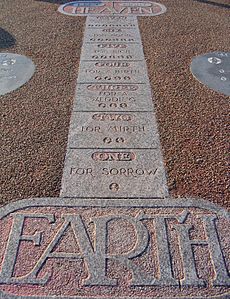 Hopscotch game with the magpie rhyme

In Italian, British and French folklore, magpies are believed to have a penchant for picking up shiny items, particularly precious stones or metal objects. Rossini's opera La gazza ladra and The Adventures of Tintin comic The Castafiore Emerald are based on this theme. In Bulgarian, Czech, German, Hungarian, Polish, Russian, Slovak and Swedish folklore the magpie is seen as a thief. In Sweden, it is further associated with witchcraft. In Norway, a magpie is considered cunning and thievish, but also the bird of huldra, the underground people.

The European attitude is starkly contrasted with Korea's, where the magpie is celebrated as "a bird of great good fortune, of sturdy spirit and a provider of prosperity and development". Similarly, in China, magpies are seen as an omen of good fortune. This is even reflected in the Chinese word for magpie, in which the first character means "happiness".

All content from Kiddle encyclopedia articles (including the article images and facts) can be freely used under Attribution-ShareAlike license, unless stated otherwise. Cite this article:
European magpie Facts for Kids. Kiddle Encyclopedia.