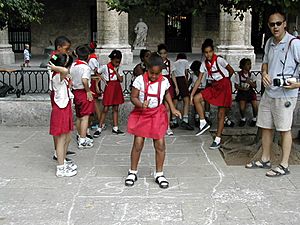 Primary schoolchildren hopscotching in Cuba, where the game is known as "pon"

Hopscotch is a children's game that can be played with several players or alone. Hopscotch is a popular playground game in which players toss a small object into numbered triangles of a pattern of rectangles outlined on the ground and then hop or jump through the spaces to retrieve the object.

To play hopscotch, a court is first laid out on the ground. Depending on the available surface, the court is either scratched out in the dirt or drawn with chalk on pavement. Courts may be permanently marked where playgrounds are commonly paved, as in elementary schools. Designs vary, but the court is usually composed of a series of linear squares interspersed with blocks of two lateral squares. Traditionally the court ends with a "safe" or "home" base in which the player may turn before completing the reverse trip. The home base may be a square, a rectangle, or a semicircle. The squares are then numbered in the sequence in which they are to be hopped.

The first player tosses the marker also called a "lucky" unto the court. This object should land in the square without bouncing, sliding, or rolling out. It is typically a small flat stone, coin, bean bag, or small chain with a charm. The marker must land completely within the square without touching the line. The player then hops through the course, skipping the square with the marker in it. Single squares must be hopped on one foot. For the first single square, either foot may be used. Side-by-side squares are straddled, with the left foot landing in the left square, and the right foot landing in the right square. Optional squares marked "Safe", "Home", or "Rest" are neutral squares, and may be hopped through in any manner without penalty. After hopping into "Safe", "Home", or "Rest", the player must then turn around and return through the course (square 9, then squares 8 and 7, next square 6, and so forth) on one or two legs depending on the square until reaching the square with the marker. The player stops in the square before the marker and reaches down to retrieve the marker and continue the course as stated, without touching a line or stepping into a square with another player's marker.

Upon successfully completing the sequence, the player continues the turn by tossing the marker into square number two, and repeating the pattern.

If, while hopping through the court in either direction, the player steps on a line, misses a square, or loses balance, the turn ends. Players begin their turns where they last left off. The first player to complete one course for every numbered square on the court wins the game.

Although the marker is most often picked up during the game, historically, in the boy's game, the marker was kicked sequentially back through the course on the return trip and then kicked out. 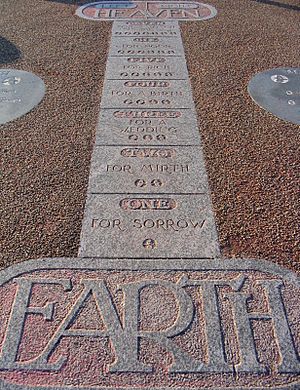 A hopscotch game with a traditional magpie rhyme in Morecambe, England

It is attested that an ancient form of hopscotch was played by Roman children, but the first recorded references to the game in the English-speaking world date back to the late 17th century, usually under the name "scotch-hop" or "scotch-hopper(s)". A manuscript Book of Games compiled between 1635 and 1672 by Francis Willughby refers to 'Scotch Hopper‥. They play with a piece of tile or a little flat piece of lead, upon a boarded floor, or any area divided into oblong figures like boards'. In Poor Robin’s Almanack for 1677, the game is referred to as "Scotch-hoppers". The entry states, "The time when schoolboys should play at Scotch-hoppers." The 1707 edition of Poor Robin’s Almanack includes the following phrase… "Lawyers and Physicians have little to do this month, so they may (if they will) play at Scotch-hoppers." In 1828, Webster's An American Dictionary of the English language also referred to the game as 'Scotch-hopper'...'a play in which boys hop over scotches and lines in the ground.'

Since the game was known and popular in the seventeenth century, it is logical to suppose it may have existed at least a few decades (or perhaps even many centuries) before its earliest literary reference; but no conclusive evidence has yet been presented to support this theory.

According to the Oxford English Dictionary, the etymology of hopscotch is a formation from the words "hop" and "scotch", the latter in the sense of "an incised line or scratch" The journal of the British Archaeological Association, Volume 26 (dated March 9, 1870) states, "The sport of Hop-Scotch or Scotch-Hoppers is called in Yorkshire 'Hop-Score,' and in Suffolk 'Scotch Hobbies or Hobby,' from the boy who gets on the player's back whilst hopping or 'hicking,' as it is there termed; and in North Britain it is known as 'Peevers, Peeverels, and Pabats.'" 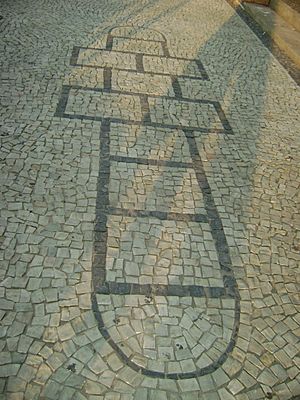 A variation in the entrance of CEFET-MG, Belo Horizonte, Brazil.

There are many other forms of hopscotch played across the globe. In India it is called Stapu, Nondi (Tamil) or Kith-Kith, in Spain and some Latin American countries, it's rayuela, although it may also be known as golosa or charranca. In Turkey, it is Seksek (the verb "sek" means to jump with one foot). In Russian it is known as классики (diminutive for the word meaning classes). In Poland, it is called klasy, meaning classes (rectangular shape, with the use of no marker but with speaking names of various items of a given class, e.g. colours or flowers, while jumping on successive fields) or pajac, meaning buffoon (human shape, with the use of a thrown marker, e.g. a piece of glass or stone). Swedes name the game hoppa hage (lit. jumping the garden), while in Norway it is called paradis, or Paradise. In Italy the game is known as campana (meaning bell), or mondo (meaning world). In the Netherlands and Flanders, it is called Hinkelen. In Bosnia, Croatia and Serbia it is called školica, meaning little school. In Malaysia the most popular variant is called tengteng. In Mexico, it is called bebeleche (mamaleche) meaning drink milk or avioncito meaning little plane ("probably because of the shape"). In Cuba and in Puerto Rico it is called "La Peregrina" (meaning "Pilgrim Girl") and the squares represent the 9 rings the pilgrim traveler has to pass in order to reach Heaven from Purgatory according to Dante's Inferno. In Romania the game is called șotron and is widely played by children all over the country. In Brazil it is called amarelinha. The name evolved from marelle, the French name for the game, but was identified to the radical amarelo (yellow) and its diminutive in -inho/a. In Breton, the name is reg or delech. The Albanian variant is called rrasavi, which is composed of two words: rrasa ("the flat stone", an object used to play the game) and vi ("line", a reference to the lines that comprise the diagram of the course). In Philippines, hopscotch is called "piko" (pee-ko) and sometimes also called kiki (ki-ki). Its common court in the Philippines has six squares. In India, hopscotch is called "thikrya", because broken stones called 'thikrya' are slid across the grid as players hop to next squares. In South Korea, hopscotch is called "ttangttamŏkki (meaning "Scoring Land") and is widely played across the nation. 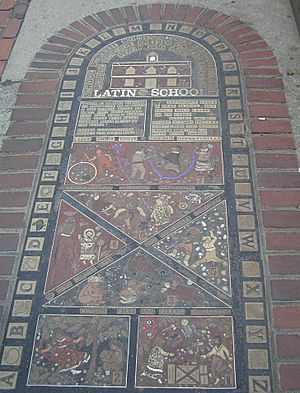 Street mosaic in the shape of hopscotch game in Boston, USA

The game's generic name in Persian is Laylay. The most common form of Laylay in Iran resembles the older Western types and uses six or more (always an even number) side-by-side squares successively (vertically) numbered. The player uses a peg or a flat stone that the player must kick to the next square as the player is hopping. If either the stone or a player's foot lands on a line, the player forfeits the game (or loses a turn). Although somewhat less common, the contemporary Western type is also played.

In the Glasgow area, the game is called "beds" or "Peever(s)". "Peever" is also the name of the object which is slid across the grid to land in a square. In the 1950s and 1960s in Glasgow, it was common for the peever to be a shoe polish tin filled with stones or dirt and screwed shut.

A French variant of hopscotch is known as escargot (snail) or marelle ronde (round hopscotch). It is played on a spiral course. Players must hop on one foot to the center of the spiral and then reverse their path to back out again.

If the player reaches the center without stepping on a line or losing balance he or she marks one square with his or her initials, and from then on may place two feet in that square, while all other players must hop over it. The game ends when all squares are marked or no one can reach the center, and the winner is the player who "owns" the most squares.

In Germany, Austria, and Switzerland the game is called Himmel und Hölle (Heaven and Hell) although there are also some other names used, depending on the region. The square below 1 or the 1 itself are called Erde (Earth) while the second to last square is the Hölle (Hell) and the last one is Himmel (Heaven). The first player throws a small stone into the first square and then jumps to the square and must kick the stone to the next square and so on, however, neither the stone nor the player may stop in Hell so they try to skip that square. 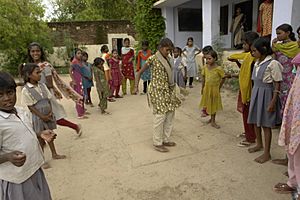 In India, hopscotch is also called Kith-Kith, Stapu, in the Hindi-speaking areas, or Ek-hat - Du-hat in Bengal, Chirpi in Maharashtra, Kunte bille in Karnataka, Paandi in Tamil Nadu, and Tokkudu Billa in Andhra Pradesh and Telangana. These games have similar principles in that players must hop on one foot and must throw the marker in the right square. The game is mostly common among girls in India, though some boys play too.

Hopscotch was/is called Potsy in New York City. (The name probably refers to the "potsherd" that was used as a marker.)

In Brazil, this game is called Amarelinha.

In Australia, hopscotch is played in stages. The first stage is played by hopping per the standard rules. Once this stage is complete, the player is promoted to the next stage called "jumps" where the player jumps into each square with two feet. The final stage is the most difficult stage called "sizzles", which is similar to jumps except the legs are crossed. The first player to complete all three stages wins. If a player touches a line, he is demoted to the start of his current stage. For younger players, "helps" can be used. These are lines typically extended at the sides between squares 2 and 3 so younger players can use these to get closer to throwing the "tortoise " into the required square.

Is the name of the game, at least in Argentina, Costa Rica, Ecuador, Guatemala, Honduras, Nicaragua, Panama, Uruguay and Spain.

All content from Kiddle encyclopedia articles (including the article images and facts) can be freely used under Attribution-ShareAlike license, unless stated otherwise. Cite this article:
Hopscotch Facts for Kids. Kiddle Encyclopedia.