The Adventures of Tintin facts for kids 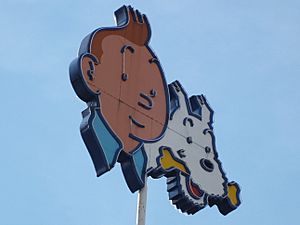 Tintin and Snowy, appearing on the former headquarters of Tintin publisher Le Lombard, close to the Gare du Midi, in Brussels
For the 2011 movie directed by Steven Spielberg, see The Adventures of Tintin (movie).

The Adventures of Tintin (French: Les Aventures de Tintin) is a Belgian comic strip, created by Hergé (Georges Remi) starting in the late 1920s and into the 1970s. They were originally written and published in French, but have been translated into many languages and are popular around the world.

The stories center around a young reporter from Belgium named Tintin, who travels the world and has many exciting adventures with his dog, a white wire fox terrier named Snowy (Milou, in French) and later (starting with The Crab with the Golden Claws in 1941) his friend, Captain Haddock, a bearded drunk with a temper. Other popular characters include Professor Cuthbert Calculus (Professeur Tryphon Tournesol) an absent-minded and mostly deaf (but he insists he's hard of hearing) scientist and inventor, and Thomson and Thompson (Dupond et Dupont), two silly detectives. 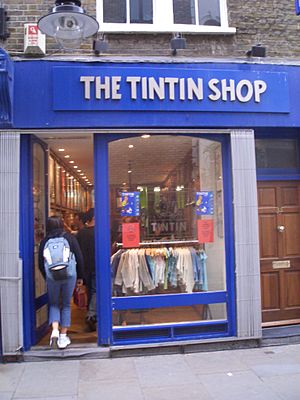 The Tintin Shop in London, England

The stories are a mixture of many different genres, including adventure, satire, and social commentary and changed over time. Twenty-three completed books , came out between 1929 and 1976. A twenty-fourth story, Tintin in Alph-Art, was never officially finished following the death of Hergé in 1983. There have been many unofficial books, but most of those are parodies or not part of the official series. The books in the official series are:

There have also been plays, films, and animated cartoons based on the stories. Steven Spielberg and Peter Jackson have made a movie about Tintin. There are also Tintin Shops in Europe, which sell books, toys and other items based on the books.

All content from Kiddle encyclopedia articles (including the article images and facts) can be freely used under Attribution-ShareAlike license, unless stated otherwise. Cite this article:
The Adventures of Tintin Facts for Kids. Kiddle Encyclopedia.