The Wire Fox Terrier (also known as Wire Hair Fox Terrier or Wirehaired Terrier) is a breed of dog, one of many terrier breeds. It is a fox terrier, and although it bears a resemblance to the Smooth Fox Terrier, they are believed to have been developed separately. 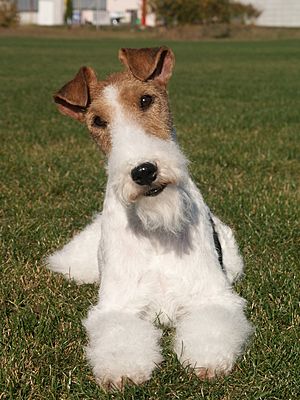 Coat color has a predominant white base 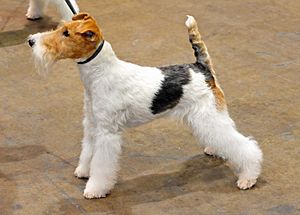 The Wire Fox Terrier is a sturdy, balanced dog weighing 7.7 to 8.6 kg (17 to 19 lb) for males and 6.8 to 7.7 kg (15 to 17 lb) for females. It should not be more than 39 cm (15 1⁄2 in) at the withers. Its rough, broken coat is distinctive. Coat color consists of a predominant white base with brown markings of the face and ears, and usually a black saddle or large splotch of color; there may be other black or brown markings on the body.

The dog should be alert, quick and ready to respond swiftly with enthusiasm. However, they should also be friendly, communicative, and playful if they receive the proper care and exercise. Bred to be independent thinkers, they are capable of tactical maneuvering for vermin and other sport.

Often, wire fox terriers are abandoned or surrendered for reasons that may include: running away instead of coming on a command; chasing cars, bicycles, other dogs, etc.; or taunting and then attacking other animals, including a household's cats and other dogs –and they are able to do serious damage. But these are actually normal behaviors for a breed designed to hunt not only foxes, but also badgers and boars, with no more fear of cows or buses than they have of small prey. Keeping one as a pet requires firm control to redirect these prey instincts and provide the dog with enough exercise and diversion. With diligent supervision, wire fox terriers can be amusing, exciting, long-lived companion animals. 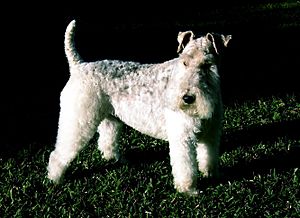 Wire fox terriers kept for show are hand stripped; if the hair becomes too long, it is taken out by hand in order to preserve the colors and the glossiness of the coat. Many kept as pets are clipped monthly by a groomer. Clipping dulls the colors and makes the coat soft, curly and more difficult to keep clean, but it is preferred by many owners due to being a simpler (and cheaper) procedure than stripping.

The wire fox terrier was developed in England by fox hunting enthusiasts and is believed to be descended from a now-extinct rough-coated, black-and-tan working terrier of Wales, Derbyshire, and Durham. The breed was also thought to have been bred to chase foxes into their burrows; the dogs' short, strong, usually docked tails were used as handles by the hunter to pull them back out. 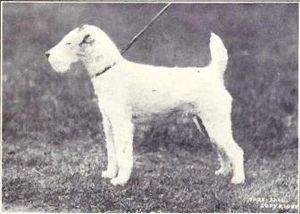 Although it is said Queen Victoria owned one, and her son and heir, King Edward VII, did own a wire fox terrier named Caesar, the breed was not popular as a family pet until the 1930s, when The Thin Man series of feature films was created. Asta, the canine member of the Charles family, was a wire fox terrier, and the popularity of the breed soared. Milou (Snowy) from The Adventures of Tintin comic strip is also a wire fox terrier.

In the late 20th century, the popularity of the breed declined again, most likely due to changing living conditions in the Western world and the difficulty of keeping hunting terriers in cities due to their strong prey instincts.

As of 2019, the wire fox terrier has the distinction of having received more Best in Show titles at Westminster Kennel Club dog shows (currently 15) than any other breed. Matford Vic, a wire fox terrier, is one of only five dogs to have won the Westminster Kennel Club Dog Show on more than one occasion. She won the competition twice, in 1915 and 1916. The only dog to win it on more occasions was Warren Remedy, a smooth fox terrier, who won it on three occasions between 1907 and 1909.

All content from Kiddle encyclopedia articles (including the article images and facts) can be freely used under Attribution-ShareAlike license, unless stated otherwise. Cite this article:
Wire Fox Terrier Facts for Kids. Kiddle Encyclopedia.