Kids Encyclopedia Facts
Not to be confused with Beekman, New York. 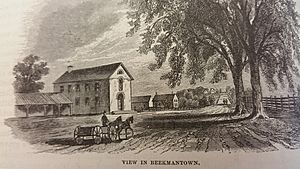 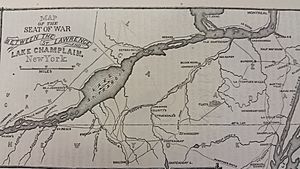 War of 1812 map showing Beekmantown in the lower right

Beekmantown is a town in Clinton County, New York, United States. The population was 5,545 at the 2010 census. The town name is that of William Beekman, an original landowner. It is on the east border of the county, just north of Plattsburgh.

The land was first settled around 1783. The town was formed in 1820 from the town of Plattsburgh. Part of Beekmantown was lost in 1854 when the town of Dannemora was established.

The east town line runs through the center of the west channel of Lake Champlain and is the state border with Vermont.

There were 2,004 households out of which 36.0% had children under the age of 18 living with them, 61.2% were married couples living together, 7.8% had a female householder with no husband present, and 26.3% were non-families. 18.4% of all households were made up of individuals and 5.9% had someone living alone who was 65 years of age or older. The average household size was 2.65 and the average family size was 3.00.

Communities and locations in Beekmantown

All content from Kiddle encyclopedia articles (including the article images and facts) can be freely used under Attribution-ShareAlike license, unless stated otherwise. Cite this article:
Beekmantown, New York Facts for Kids. Kiddle Encyclopedia.