Kids Encyclopedia Facts
For counties with a similar name, see Washington County (disambiguation).
Not to be confused with Washington, New York.

Washington County is a county in the U.S. state of New York. As of the 2010 census, the population was 63,216. The county seat is Fort Edward. The county was named for President George Washington.

When counties were established in New York State in 1683, the present Washington County was part of Albany County. This was an enormous county, including the northern part of New York State as well as all of the present state of Vermont and, in theory, extending westward to the Pacific Ocean. This county was reduced in size on July 3, 1766 by the creation of Cumberland County, and further on March 16, 1770 by the creation of Gloucester County, both containing territory now in Vermont.

On March 12, 1772, what was left of Albany County was split into three parts, one remaining under the name Albany County. The other two were called Tryon County (later renamed Montgomery County) and Charlotte County.

In 1784, Charlotte County was renamed Washington County in honor of George Washington, the American Revolutionary War general and later President of the United States of America.

In 1791, the Town of Cambridge was transferred from Albany County to Washington County.

In 1813, Warren County was split off from Washington County.

In 1994, with the completion of the new municipal center, the county seat was moved from Hudson Falls to Fort Edward.

In 2006, Cambridge Town Supervisor Jo Ann Trinkle made history by becoming the first Chairwoman of the Board of Supervisors.

Washington County has four historic covered bridges, each listed on the National Register of Historic Places:

Including those, it has a total of 35 sites listed on the National Register. The Lemuel Haynes House is further designated to be a National Historic Landmark. 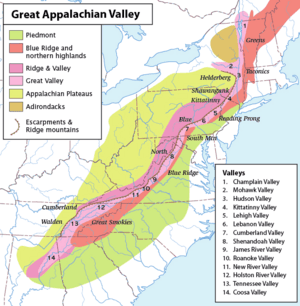 A map of the Appalachian Mountains, highlighting the Great Appalachian Valley. The main mountain regions on either side are named, as are the various local valleys.

Washington County is a long narrow county located in the northeastern section of the State. It is known for its rich valley farm land and is part of the Great Appalachian Valley (also known simply as the 'Great Valley') which is a long narrow valley strip often between tall mountain ranges. The county transitions from the Taconic Mountains to the Adirondack Mountains, and from the Lake Champlain Valley to Hudson River Valley.

Much of the county is part of the slate valley of the Upper Taconic Mountains (Taghkanic, meaning 'in the trees'). The eastern boundary of Washington County is the New York–Vermont border, part of which is Lake Champlain. This is also the border with New England proper. The northern end of the county is part of the Adirondack Mountains. Western boundaries include primarily the Hudson River and Lake George.

Washington County belongs to the following valleys and watersheds: Champlain Valley / Lake George Watershed—02010001 Hudson River Valley / Hudson-Hoosic Watershed—02020003 Waters in the northern part drain into Lake Champlain via Lake George (Horican) or the Mettawee River, and then flow into the Saint Lawrence River (Kaniatarowanenneh). These waters mingle in the Saint Lawrence with waters of all the Great Lakes as they flow northeast into the Gulf of Saint Lawrence, and ultimately join the Atlantic Ocean. Meanwhile, the remainder of waters drain south via the Hudson River (Muh-he-kun-ne-tuk or Muhheakantuck), and ultimately flow south into the Atlantic Ocean below New York City. See the approximation of the watershed divide mapped in context of mountains [1] and valleys [2]. 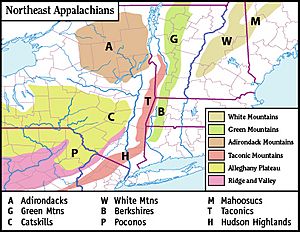 Orogenies of the northeast United States

Nearly half of its borders are by long bodies of water. Winding across the bottom of the county is the legendary Batten Kill (Dionondehowa), famous for its worldclass flyfishing, and its marvelous falls (near the Washington County fairgrounds).

Black Mountain, part of the Adirondacks, is the tallest peak in Washington County, and has beautiful views of Lake George, Lake Champlain, the surrounding countryside, and the Adirondacks, Taconic Mountains and Green Mountains. Willard Mountain is a ski slope in southern part of the county. 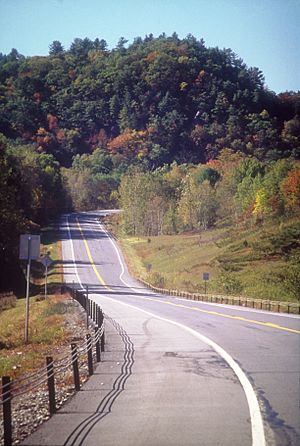 All content from Kiddle encyclopedia articles (including the article images and facts) can be freely used under Attribution-ShareAlike license, unless stated otherwise. Cite this article:
Washington County, New York Facts for Kids. Kiddle Encyclopedia.