Whitehall is a village located in the town of Whitehall in Washington County, New York, United States. It is part of the Glens Falls Metropolitan Statistical Area. The village population was 2,614 in 2010.

The village of Whitehall is located just south of the point where the Vermont border connects to the southern end of Lake Champlain. 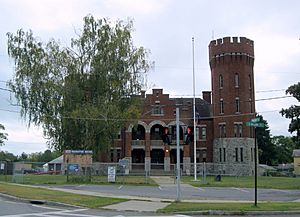 The village was founded in 1759 as "Skenesborough" by Major Philip Skene who built the barracks at Crown Point under Gen. Jeffrey Amherst, sold out his commission in the British army to establish the community and the many associated enterprises he planned and later carried out. It was the first settlement at Lake Champlain and became an important trade center. It was on one of two routes between English and French colonies.

On May 9, 1775 Lieutenant Samuel Herrick, leading as an advance party for Benedict Arnold's and Ethan Allen's attack on Fort Ticonderoga, surprised Major Skene and his small garrison. While he intended to use Skene's boats to ferry men across the lake, his party didn't arrive in time. Skene's schooner was used later to capture St. Johns.

In 1776, General Philip Schuyler built a small fleet of ships here. They were used by Benedict Arnold in the Battle of Valcour Island in October. The event led to Whitehall's modern-day claim to be the birthplace of the United States Navy. The surviving vessels returned to be destroyed to prevent their capture. General John Burgoyne led his forces southward through this area during the Saratoga Campaign.

During the War of 1812 the village was a ship building community supplying vessels for naval battles on Lake Champlain.

US Route 4 and NY Route 22 diverge at the village. Whitehall village is the north end of the Champlain Canal, which connects the Hudson River to Lake Champlain.

Amtrak, the national passenger rail system, provides service to Whitehall, operating its Adirondack daily in both directions between Montreal and New York City.

All content from Kiddle encyclopedia articles (including the article images and facts) can be freely used under Attribution-ShareAlike license, unless stated otherwise. Cite this article:
Whitehall (village), New York Facts for Kids. Kiddle Encyclopedia.