The Champlain Canal is a 60-mile (97 km) canal that connects the south end of Lake Champlain to the Hudson River in New York. It was simultaneously constructed with the Erie Canal and is now part of the New York State Canal System and the Lakes to Locks Passage.

An earlier proposal made in the late 1700s by Marc Isambard Brunel for a Hudson River - Lake Champlain canal was not approved. Another proposal for the canal was made in 1812 and construction authorized in 1817. By 1818, 12 miles (19 km) were completed, and in 1819 the canal was opened from Fort Edward to Lake Champlain. The canal was officially opened on September 10, 1823. It was an immediate financial success, and carried substantial commercial traffic until the 1970s. 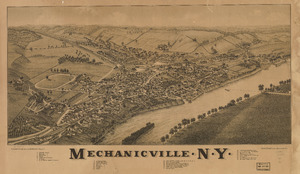 Perspective map and of Mechanicville and list of landmarks from late 19th century by L.R. Burleigh showing the Champlain Canal and Hudson River

The enlarged barge canal provides a convenient route from the Atlantic Ocean and Hudson River to Lake Champlain for recreational boaters. The canal begins about 3 miles (4.8 km) north of the locks at the Troy Federal Dam, at the point where the Erie Canal splits from the Hudson River. The Champlain Canal follows the Hudson River north for approximately 35 miles (56 km), with six locks providing navigation around dams on the Hudson River, until it reaches lock C-7 in Fort Edward, New York. At this point, the canal follows a constructed channel for approximately 25 miles (40 km), with five additional locks, bringing the canal to the southern end of Lake Champlain at Whitehall, New York. 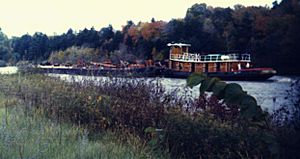 Tug and barge on the Champlain Canal during the 1980s 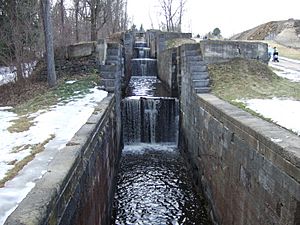 Second-generation water supply locks (the 5 combines), built to supply water from the Hudson River to the Champlain canal, Glens Falls Feeder, Fort Edward, NY. Also utilized as secondary locks to navigate from Glen's Falls to Champlain canal. Not in use.

The following list of locks is provided for the current canal, from south to north. There are a total of 11 locks on the Champlain Canal.

There is no Lock C10 on the Champlain Canal. The Troy Federal Lock, located just north of Troy, New York, is not part of the New York State Canal System proper; it is operated by the United States Army Corps of Engineers. The Champlain Canal officially begins at the confluence of the Hudson and Mohawk rivers at Waterford, New York.

Distance is based on position markers from an interactive canal map provided online by the New York State Canal Corporation and may not exactly match specifications on signs posted along the canal. Mean surface elevations are comprised from a combination of older canal profiles and history books as well as specifications on signs posted along the canal. The margin of error should normally be within 6 inches (15.2 cm).

All surface elevations are approximate.

All content from Kiddle encyclopedia articles (including the article images and facts) can be freely used under Attribution-ShareAlike license, unless stated otherwise. Cite this article:
Champlain Canal Facts for Kids. Kiddle Encyclopedia.