Mechanicville is a city in Saratoga County, New York, United States. The population is 5,196 as of the 2010 census. It is the smallest city by area in the state. The name is derived from the occupations of early residents.

The city is located on the eastern border of Saratoga County and is north of Albany, the state capital. Mechanicville borders the towns of Stillwater (of which it was once a part) and Halfmoon in the county, and the town of Schaghticoke, Rensselaer County.

The first listing of a settlement on Thenendehowa Creek is in 1721. At that time, Cornelius Van Buren had a sawmill at the mouth of the creek where it emptied into the Hudson. The first documented occurrence of the name "Mechanicville" dates back to 1829. The name comes from the early settlers, who were independent mastercraftsmen such as millers, carpenters, or butchers, whose professions were commonly known as the "mechanical arts" at the time. About 35 years later, small flour mills were already established. When the Champlain Canal reached the settlement in 1823, and especially when the Rensselaer and Saratoga Railroad laid a track through the area in 1835, Mechanicville became an important commerce interchange.

The community became an incorporated village in 1859, when it had about 1000 inhabitants. It grew rapidly as textile mills, factories and a linen thread company came to Mechanicville. The first conspicuous casualty of the American Civil War, Elmer E. Ellsworth, was buried in Mechanicville in 1861. In 1878, additional railways came to the village, and it became an important center of papermaking. In 1898, a hydroelectric power plant was built on the Hudson River by Robert Newton King, and is now the oldest continuously-operating hydroelectric plant in the United States. The Mechanicville Hydroelectric Plant was listed on the National Register of Historic Places in 1989.

By 1900, it was a major transfer yard and car repair center for the railways. In the 1920s, Mechanicville had a population of nearly 10000. In both the 1900 and 1910 censuses, Mechanicville was enumerated with the town of Half Moon, just to the south of Stillwater. Mechanicville became a city in 1915. By 1932, it became the terminal of the first experimental high-voltage direct-current (HVDC) scheme in the U.S.: the HVDC Mechanicville–Schenectady line.

With the decline of the railroads, Mechanicville suffered. The largest paper mill in the world which Mechanicville had once hosted (in 1904), ceased operations in 1971. The once thriving industrial city is today a quiet residential city, with most inhabitants working in Albany, Schenectady, and other nearby communities. 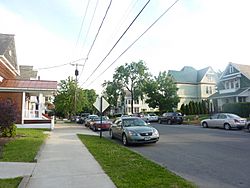 A typical residential street in Mechanicville.

On November 1, 2001, Mechanicville was featured on the Daily Show with then-rising comedian Steve Carell. The Mechanicville Hydroelectric Plant and Col. Elmer E. Ellsworth Monument and Grave are listed on the National Register of Historic Places.

On May 31, 1998, a large tornado tore through Mechanicville and the adjacent town of Stillwater. It was spawned by a series of severe storms in the late afternoon, causing major damage to the town's old industrial section located on US Route 4 and NY-32 along the Hudson River. One of the two historic smokestacks (visible from 2 miles away) was knocked down by the tornado. In 2005, the other smokestack and the conjoined building were bulldozed. Houses on the Viall Avenue hill sections of Mechanicville and Stillwater were completely destroyed. The tornado was rated F3 on the Fujita scale (winds estimated at 165 MPH).

In January 2012, a new intermodal and automotive terminal opened on the site of a former Boston and Maine rail yard. The new rail yard was built by Pan Am Southern, a joint venture between Pan Am Railways and Norfolk Southern.

The $40 million facility Is also used for filet-toupee operations, converting double stack container trains from the west to single stack by removing the top layer of containers. This allows the rest of the train to proceed east along track that lacks double stack clearance, particularly the 4-3/4 mile Hoosac Tunnel. The removed containers are trucked to local destinations. Toupee refers to the reverse process, where a single stack train coming from the east has additional containers placed on top for the rest of its trip. Some 300 trucks a day visit the site. The automotive terminal opened in 2014. 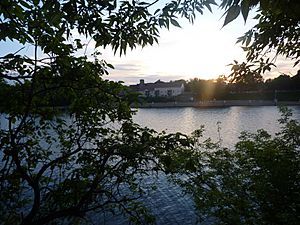 The Hudson River in Mechanicville viewed from Hemstreet Park.

There were 2,219 households out of which 29.1% had children under the age of 18 living with them, 40.9% were married couples living together, 12.3% had a female householder with no husband present, and 42.5% were non-families. 36.5% of all households were made up of individuals and 19.4% had someone living alone who was 65 years of age or older. The average household size was 2.26 and the average family size was 2.97.

All content from Kiddle encyclopedia articles (including the article images and facts) can be freely used under Attribution-ShareAlike license, unless stated otherwise. Cite this article:
Mechanicville, New York Facts for Kids. Kiddle Encyclopedia.