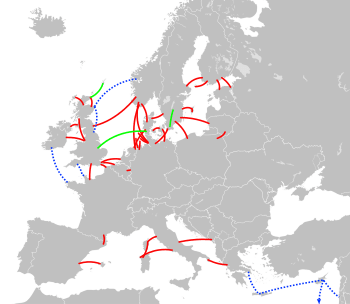 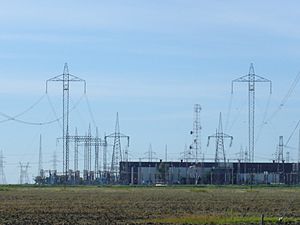 HVDC was first demonstrated in 1882 in Germany. The technology was further developed during the 1930s in Sweden and Nazi Germany. Early commercial uses were in the Soviet Union and Sweden in 1951. 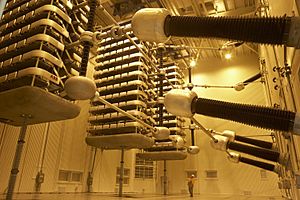 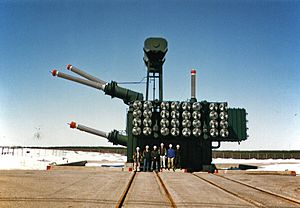 The transformer at the converter station ensures that the station is isolated from the AC system connected to the HVDC system. It also provides the correct voltage level which will be converted to DC voltage. 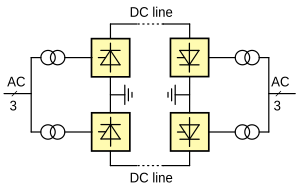 In HVDC bipolar configuration, a pair of conductors are used, each at a high potential with respect to ground in opposite polarity. The DC current flows via the positive pole and returns via the negative pole. The connection point between the positive and negative poles is grounded to the earth.

In this configuration, virtually no earth or neutral current is flowing. When one pole is broken, half of its transfer capability is still available.

A back-to-back HVDC station is a HVDC station in which both converters are located within the same building area where the length of the DC line is being kept as short as possible.

All content from Kiddle encyclopedia articles (including the article images and facts) can be freely used under Attribution-ShareAlike license, unless stated otherwise. Cite this article:
High-voltage direct current Facts for Kids. Kiddle Encyclopedia.