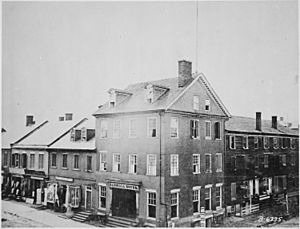 The Marshall house where Col Ellsworth was shot 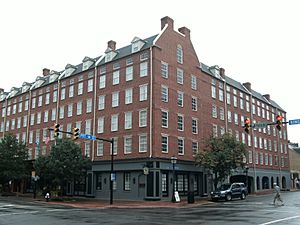 The Hotel Monaco, now The Alexandrian, on the site of the Marshall House, seen in 2009. 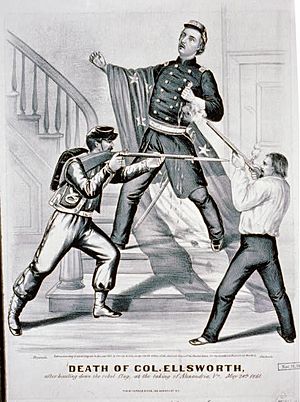 Photographs show Colonel Elmer Ellsworth of Field and Staff, 11th New York Infantry Regiment; Marshall House at the corner of King and Pitt Streets, Alexandria, Virginia, the scene of the assassination of Col. Ellsworth on May 24, 1861; and Lieutenant Francis Brownell of Co. A, 11th New York Infantry Regiment, who killed James Jackson after he murdered Col. Ellsworth. From the Liljenquist Family Collection of Civil War Photographs, Prints and Photographs Division, Library of Congress. Photographs by Mathew Brady

Elmer Ephraim Ellsworth (April 11, 1837 – May 24, 1861) was a United States Army officer and law clerk who was the first conspicuous casualty and the first Union officer to die in the American Civil War. He was killed while removing a Confederate flag from the roof of the Marshall House inn in Alexandria, Virginia.

Before the war, Ellsworth led a touring military drill team, the "Zouave Cadets of Chicago". He was a close personal friend of Abraham Lincoln, who as President later eulogized him as "the greatest little man I ever met". After his death, Ellsworth's body lay in state at the White House. The phrase, "Remember Ellsworth", became a rallying cry and call to arms for the Union Army.

All content from Kiddle encyclopedia articles (including the article images and facts) can be freely used under Attribution-ShareAlike license, unless stated otherwise. Cite this article:
Elmer E. Ellsworth Facts for Kids. Kiddle Encyclopedia.