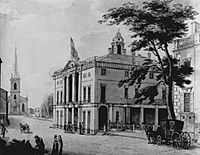 Archibald Robertson's drawing of the building, circa 1798.

Federal Hall was the first capitol building of the United States, and was the site where George Washington was inaugurated as America's first president in 1789. In 1700, it was built on Wall Street and named New York City Hall. It was renamed to Federal Hall when it became the capitol under the new United States Constitution.

In 1812, the building was demolished. A new customs house replaced it in 1842. In 1882, a bronze statue of President Washington was made and put in front of the steps. The new building officially became a landmark according to the New York City Landmarks Preservation Commission on 21 December 1965.

All content from Kiddle encyclopedia articles (including the article images and facts) can be freely used under Attribution-ShareAlike license, unless stated otherwise. Cite this article:
Federal Hall Facts for Kids. Kiddle Encyclopedia.