Thomas "Tad" Lincoln III (April 4, 1853 – July 15, 1871) was the fourth and youngest son of Abraham and Mary Todd Lincoln. The nickname "Tad" was given to him by his father, who observed that he had a large head and was "as wiggly as a tadpole" when he was a baby. Tad Lincoln was known to be impulsive and unrestrained, and he did not attend school during his father's lifetime. He had free run of the White House, and there are stories of him interrupting presidential meetings, collecting animals, and charging visitors to see his father. He died unexpectedly at the age of 18 on July 15, 1871, in Chicago.

Thomas Lincoln III was born on April 4, 1853, the fourth son of Abraham Lincoln and Mary Todd. His three elder brothers were Robert (1843–1926), Edward (1846–1850), and William (1850–1862). Named after his paternal grandfather Thomas Lincoln and uncle Thomas Lincoln, Jr., the fourth boy was soon nicknamed "Tad" by his father, for his small body and large head, and because he wiggled like a tadpole as an infant. Lincoln's first name has occasionally been erroneously recorded as Thaddeus.

Lincoln was born with a form of cleft lip and palate, causing him speech problems throughout his life. He had a lisp and delivered his words rapidly and unintelligibly. Often only those close to Lincoln were able to understand him. For example, he called his father's bodyguard, William H. Crook, "Took", and his father "Papa Day" instead of "Papa Dear". The cleft palate contributed to uneven teeth; he had such difficulty chewing food that his meals were specially prepared.

Lincoln and his brother Willie were considered "notorious hellions" during the period they lived in Springfield. They were recorded by their father's law partner William Herndon as having turned their law office upside down, pulling the books off the shelves, while their father appeared oblivious to their behavior. 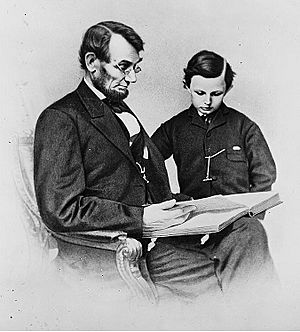 Tad Lincoln with his father looking at a photo album

Upon their father's election as President, both Tad and Willie moved into the White House and it became their new playground and home. At the request of Mrs. Lincoln, Julia Taft brought her younger brothers, 14-year-old "Bud" (Horatio Nelson Taft Jr., 1847–1915) and 12-year-old "Holly" (Halsey Cook Taft, 1849–1897), to the White House, and they became playmates of the two young Lincolns.

In February 1862, both Lincoln boys contracted typhoid fever and both boys were bedridden. Willie died on February 20, while Tad recovered. However he cried for a month, not only for his brother's death, but for the loss of his other two playmates Bud and Holly, for his mother sent them away after Willie's death, because they reminded her too much of him. After Willie's death, Tad's parents became even more lenient toward Tad's behavior, and Tad spent nearly all his time with his father.

During the time his father was alive, Tad was impulsive, unrestrained, and did not attend school. John Hay wrote that the boy's numerous tutors in the White House usually quit in frustration. Tad had free run of the White House, and there are stories of him interrupting presidential meetings, collecting animals, charging visitors to see his father, and more.

After the assassination, Mary, Robert, and Tad Lincoln lived together in Chicago. Robert moved out after a short time, and Tad began attending school. In 1868, they left Chicago and lived in Europe for almost three years, in Germany and later in England.

Lincoln suffered from what one modern commentator has called a "complex speech and language disorder" related to some form of a cleft lip or palate. This caused some problems when Lincoln was in school in Chicago. While at the Elizabeth Street School, his schoolmates sometimes called him "Stuttering Tad" because of the speech impediment, which he was able to learn how to manage as a teenager.

On Saturday morning, July 15, 1871, Lincoln died at the age of 18. The cause of death has been variously referred to as tuberculosis, a pleuristic attack, pneumonia, or congestive heart failure. Lincoln's death occurred at the Clifton House hotel in Chicago. In an obituary, John Hay affectionately referred to him as "Little Tad".

Funeral services were held for Lincoln in his brother Robert's home in Chicago. His body was transported to Springfield and buried in the Lincoln Tomb at Oak Ridge Cemetery, alongside his father and two of his brothers. Robert accompanied the casket on the train, but Mary was too distraught to make the trip.

All content from Kiddle encyclopedia articles (including the article images and facts) can be freely used under Attribution-ShareAlike license, unless stated otherwise. Cite this article:
Tad Lincoln Facts for Kids. Kiddle Encyclopedia.