The Lincoln family was an American family of English origins. It includes all the descendants of Abraham Lincoln and Mary Todd Lincoln. There are ten known descendants of Lincoln. The family line is believed to have been extinct since its last undisputed descendant, Robert Todd Lincoln Beckwith, died on December 24, 1985, without any children.

Samuel Lincoln's father Edward Lincoln was born about 1575 and remained in Hingham, Norfolk, England. He died on February 11, 1640 and was buried in the graveyard of St Andrew's Church. Edward was the only son of Richard Lincoln (buried 1620) and Elizabeth Remching. After the death of his wife, Richard married three more times. 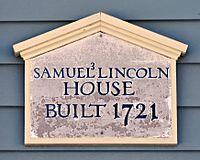 Samuel Lincoln House, built in Hingham, Massachusetts, by his grandson on land Samuel purchased in 1649

The Lincoln family arrived in Massachusetts Bay Colony in 1637, when Samuel Lincoln (1622–1690), the son of Edward Lincoln, sailed on the ship John & Dorothy from Great Yarmouth. He is considered as the patriarch of the Lincoln family in the United States. 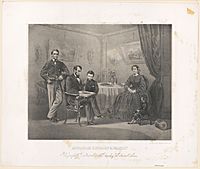 Abraham Lincoln (1809–1865) was a lawyer, politician and the 16th president of the United States from 1861 to 1865. He was born in a one-room log cabin on Sinking Spring Farm near Hodgenville, Kentucky, to Thomas Lincoln and Nancy Hanks. He married Mary Ann Todd and had four children: Robert, Edward, Willie, and Tad.

Robert Todd Lincoln Beckwith (1904–1985) was a gentleman farmer and great-grandson of Abraham Lincoln. He became the last undisputed descendant of Abraham Lincoln when his sister, Mary, died in 1975, having no children.

All content from Kiddle encyclopedia articles (including the article images and facts) can be freely used under Attribution-ShareAlike license, unless stated otherwise. Cite this article:
Lincoln family Facts for Kids. Kiddle Encyclopedia.