Grand architecture surrounds the historic market place and town greens. According to an 18th-century source, a fire destroyed many of the town's buildings, leading the better-off local families to build the handsome Georgian homes for which the town is known. The same source claims that the Hingham gentry were "so fashionable in their dress that the town is called by the neighbours 'Little London'".

Hingham is 13 miles (21 km) west from Norwich, Norfolk's county town. While many Hingham people now work in Norwich, commuting by car or bus, the town has maintained a range of shops and businesses in its historic streets and an industrial estate on Ironside Way. Despite the influence and attractions of Norwich, an active and independent town life continues to thrive and grow in Hingham. A fair visits every year, setting up on the historic Fairlands (an area of several triangular greens). There is a state-run school, providing education for children from the ages of 4–11.

The nearest railway stations are Wymondham and Attleborough, both on the Breckland Line. 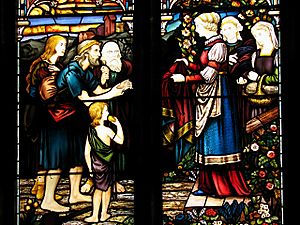 East window, St Andrew's Church, Hingham, one of the largest such windows in England, contains stained glass from a German monastery

In the early 17th century, a number of Puritan residents of Hingham, led by Hingham's former vicar Robert Peck and his associate Peter Hobart, emigrated to the then colony of Massachusetts, where they founded the town of Hingham. Peck had been censured by religious authorities for his Puritan practices, and his daughter had married the son of another well-known Puritan minister, John Rogers. The parishioners who left Hingham with Peck and Hobart had been so prominent in the community that the town was forced to petition Parliament for help, claiming that it had been devastated by the loss. Amongst their number were Samuel Lincoln, ancestor of President Abraham Lincoln, and Edward Gilman Sr., ancestor of Nicholas Gilman, New Hampshire delegate to the Continental Congress and signer of the U.S. Constitution. Memorials to the Gilman family, ancestors of those who went to America, are still visible in St Andrew's Church in Hingham, which also has a bust of Abraham Lincoln on the wall. (Several centuries later, the Gilmans of Hingham supplied two mayors of Norwich.)

In 2000, it was reported that Adrian Semmence, whose family had farmed at Hingham for three generations, was opening a woodland park (to be funded by the sale of 36-square-foot (3.3 m2) plots, mainly to Americans having connections with Hingham) to commemorate the links between his village and Hingham, Massachusetts.

The Caterham F1 team, previously Team Lotus was based here, but left Norfolk to the old Arrows team factory near Silverstone Circuit. It used to be based in nearby Hethel, but after its bankruptcy in 1994 there wasn't much activity until Lotus was resurrected as an F1 team in 2010.

All content from Kiddle encyclopedia articles (including the article images and facts) can be freely used under Attribution-ShareAlike license, unless stated otherwise. Cite this article:
Hingham, Norfolk Facts for Kids. Kiddle Encyclopedia.