Wymondham ( WIN-dəm) is a market town and civil parish in the South Norfolk district of Norfolk, England, 12 miles (19 km) south-west of Norwich off the A11 road to London. The River Tiffey runs through. The parish, one of Norfolk's largest, includes rural areas to the north and south, with hamlets of Suton, Silfield, Spooner Row and Wattlefield. It had a population of 14,405 in 2011, of whom 13,587 lived in the town itself.

Before the Great Fire

The earthworks of what was probably a large, medieval ringwork survive to some considerable height; they have been subject to ground survey and are partially visible on aerial photographs. The ringwork, which is located in an isolated part of the Stanfield estate, is thought by some to have been built by the D'Albinis between 1088 and 1139. The feature measures approximately 150m by 130m, with a large bank and water-filled ditch; the internal area also appears to be filled with irregular water-filled pits or ponds. It is thought that a gold ring of Katherine Bigot, wife of Roger Fitz-Ortet who held Stanfield Manor in AD 1306, was also recovered from this area.

Wymondham's most famous inhabitant was Robert Kett (or Ket), who led a rebellion in 1549 of peasants and small farmers in protest at the enclosure of common land. He took a force of almost unarmed men and fought for and held the City of Norwich for six weeks until defeated by the King's forces. He was hanged from Norwich Castle. Kett's Oak, said to be the rallying point for the rebellion, can still be seen today on the B1172 road between Wymondham and Hethersett, part of the former main road to London.

The Great Fire of Wymondham broke out on Sunday 11 June 1615. Two areas of the town were affected, implying there were two separate fires. One area was in Vicar Street and Middleton Street and the other in the Market Place, including Bridewell Street and Fairland Street. About 300 properties were destroyed in the fire. Important buildings destroyed included: the Market Cross, dating from 1286; the vicarage in Vicar Street; the 'Town Hall' on the corner of Middleton Street and Vicar Street; and the schoolhouse. However, many buildings such as the Green Dragon pub did survive and many of the houses in Damgate Street date back to 1400, although this is now masked by later brickwork.

The fire was started by three Gypsies – William Flodder, John Flodder and Ellen Pendleton (Flodder) – and a local person, Margaret Bix (Elvyn). The register of St Andrew's Church in Norwich records that John Flodder and others were executed on 2 December 1615 for the burning of Wymondham. Rebuilding of the destroyed buildings was quick in some cases and slower in others. A new Market Cross, extant 2016, was started and completed in 1617. However, by 1621 there were still about 15 properties not yet rebuilt. Economic conditions in the 1620s could have been a contributory factor to the delay in rebuilding.

After the Great Fire

Kett's Rebellion was evidence of an undercurrent of ferment in 16th-century Wymondham. Comparable discontent showed itself in the 17th century when a number of Wymondham citizens, including Thomas Lincoln, John Beal and others, moved to Hingham in the wave of religious dissent that swept England in the years preceding Cromwell's Commonwealth.

In 1785, a prison was built using the ideas of John Howard, the prison reformer. It was the first prison to be built in England with separate cells for the prisoners and was widely copied both in the United Kingdom and the United States.

The collapse of the woollen industry in the mid-19th century led to great poverty in Wymondham. In 1836 there were 600 hand looms, but by 1845 only 60 existed. During Victorian times the town was a backwater and never experienced large-scale development. The town centre remains very much as it must have been in the mid-17th century, when the houses were rebuilt after the Great Fire. These newer houses, and those which survived the Great Fire, still surround shoppers and visitors as they pass through Wymondham's narrow mediaeval streets.

Wymondham played a part in the Second World War that is very poorly documented. It was home to one of MI6's Radio Security Service direction finding stations; the type at Wymondham was a "Spaced Loop" design newly developed by the National Physical Laboratory. Unfortunately, this was soon found to be unsatisfactory and was converted to the more traditional Adcock type. The station at Wymondham was located at latitude=52.583333, longitude=1.121667, just north of Tuttles Lane and east of Melton Road. Based on information from one of the wartime operators it transpires that another spaced loop station was later installed alongside the first in 1944 after the Normandy invasion. This may have been due to increased interest in transmissions from western Europe where the shorter distance made the spaced loop more reliable. 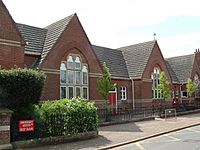 In the town centre, there is a market cross, which is now used as a Tourist Information Centre and is owned by the Town Council. The original building was destroyed in the Great Fire of Wymondham in 1615; the present building was rebuilt between 1617–18 at a cost of £25-7-0d with funds loaned by local man, Philip Cullyer. The stilted building was like many others designed to protect valuable documents from both flood and vermin. According to T. F. Thistleton Dyer's English Folklore [London, 1878], live rats were nailed by their tails to the side of the building by way of a deterrent. This bizarre superstition ended in 1902 after a child was bitten, later to die of blood-poisoning.

Wymondham Abbey is the Church of England parish church.

The headquarters of Norfolk Constabulary are located in Wymondham. 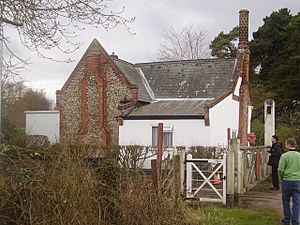 Flint was used in many types of buildings around Wymondham, including this 19th-century crossing keeper's hut on the Mid-Norfolk Railway.

The Breckland line runs through the parish, with stations at Wymondham and Spooner Row. Typical in the day is one train an hour east to Norwich and west to Cambridge. Two trains a day run to Liverpool Lime Street. Direct services to Stansted Airport were due to begin in December 2019.

The Mid-Norfolk Railway operates a station at Wymondham Abbey for heritage services to Dereham along a closed branch to Wells. The town once had a third station, Spinks Lane, which closed shortly after opening in the 19th century.

Buses by First Norfolk and Suffolk offer at least a 30-minute service to Hethersett, Norwich and Attleborough. Konectbus serves the Norfolk and Norwich University Hospital, Norwich and Watton. National Express coach services are available to London.

The A11 trunk road from Norwich to London once ran through the town centre. It was rerouted onto Harts Farm Road and Norwich Road until a dual-carriageway bypass was opened in 1996. Sections of the old A11 were reclassified as B1172 and now link Wymondham and Hethersett. A cycle path along the B1172 connects Wymondham to Norwich. The B1135 passes the northern edge of the town on its way to Dereham. 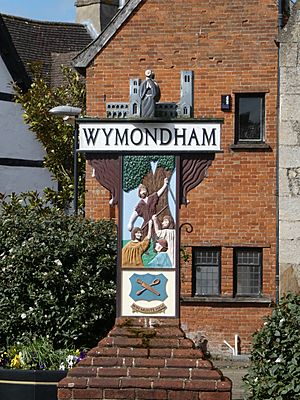 Wymondham is a commuter town mainly for Norwich, Cambridge and London. The 2011 census reported as the commonest employment sectors the wholesale and retail trade (15.4%), health and social work (13.6%) and education (11.3%).

A major employer is Norfolk Constabulary. There is a retail area centred on the market square, with national-chain branches and independent shops and businesses. Traditionally, Wymondham was a centre of woodturning and brush-making; a spigot and spoon feature on the town sign to mark this. Major brush factories appeared, with railway sidings, saw mills and engineering workshops. These closed in late 20th century and were developed as housing.

The 2011 census showed 72.6 per cent of the adult population economically active, 2.9 per cent unemployed and 16.8 per cent retired. The population is well-educated: 27 per cent have post-18 qualifications.

The following table outlines the population change in the town since 1801, with slow growth, then decline in the 19th century, followed by recovery and rapid growth by the end of the 20th century.

Wymondham Town Football Club, founded in 1883, is based at Kings Head Meadow. The senior men's team plays in the Anglian Combination Division One and has topped it five times, most recently in 2017–18. The club last won the Norfolk Senior Cup in 1888–89. Ian Gibson MP played for the club in the 1965–66 season. The senior women's team plays in the Eastern Region Women's Football League, which it won in 2017–18. In the same season it won the County Cup, which it successfully defended in 2018–19.

Wymondham Town United Football Club, based at Kett's Park, is one Norfolk's largest youth teams, with over 600 players across 22 teams.

Wymondham Rugby Club was founded in 1972 at the Foster Harrison Memorial Ground on Tuttles Lane. A new ground, Barnard Fields, opened in 2018. The senior men's team plays in the London 2 North East league, winning the Norfolk Plate in 2015–16. The senior women's team, Wymondham Wasps, plays in the Championship 2 Midlands League.

Wymondham Dell Bowls Club was a founder member of Norfolk Bowls Association in 1936. It has won the Bales Cup and the County League more often than any other club in Norfolk: twelve and fifteen times respectively. The members include the 2002 Commonwealth Games gold medallist, John Ottaway.

Wymondham Grammar School was founded in 1567 by the Norwich-born Archbishop of Canterbury, Matthew Parker. It was originally housed in Beckett's Chapel, then moved to Priory House, and closed in 1903. Silfield School opened in 1876 and closed in 1993. It is now a private dwelling.

Wymondham High Academy is located near the town centre. Wymondham College, one of 36 state boarding schools in England and the largest of its type, stands just outside the parish in Morley.

All content from Kiddle encyclopedia articles (including the article images and facts) can be freely used under Attribution-ShareAlike license, unless stated otherwise. Cite this article:
Wymondham Facts for Kids. Kiddle Encyclopedia.