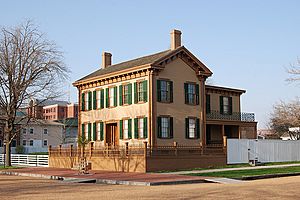 Lincoln Home National Historic Site preserves the home of Abraham Lincoln and his wife Mary Todd Lincoln in Springfield, Illinois. The Lincolns bought the house in 1844. They lived there until 1861 when Lincoln became the 16th President of the United Sates. The site includes a four-block historic district and a visitor's center. Lincoln's son, Robert Todd Lincoln donated the family home to the State of Illinois in 1887. He wanted the house to be well-maintained forever. He also wanted the house to be open to the public at no charge. The home and the historic district became a National Historic Site on August 18, 1971. The house has two floors and 12 rooms. It was the only house Lincoln ever owned.

All content from Kiddle encyclopedia articles (including the article images and facts) can be freely used under Attribution-ShareAlike license, unless stated otherwise. Cite this article:
Lincoln Home National Historic Site Facts for Kids. Kiddle Encyclopedia.