Saratoga County is a county in the U.S. state of New York. As of the 2015 U.S. Census estimate, the county's population was 226,249, representing a 3.0% increase from the 2010 population of 219,607, representing one of the fastest growth rates in the northeastern United States. The county seat is Ballston Spa. Saratoga County is included in the Capital District, encompassing the Albany-Schenectady-Troy, New York Metropolitan Statistical Area.

Saratoga County's name was derived from the Native American word "sah-rah-ka", or "Sarach-togue", meaning "the hill beside the river", referring to the Hudson River bordering the county on its eastern flank and the Mohawk River delineating its southern border. Saratoga County, bisected by the toll-free, six-lane Adirondack Northway, serves as an outdoor recreational haven and as the gateway to the Adirondack Mountains and State Park for the populations of the Albany and New York City metropolitan areas. The county is also home to the internationally renowned Saratoga Race Course, one of the oldest venues in horse racing.

Saratoga County lies at the heart of eastern New York State's recognized Tech Valley, a growing center for the computer hardware side of the high-technology industry and its concomitant venture capital investment, with great strides in the nanotechnology sector, digital electronics design, and water- and electricity-dependent integrated microchip circuit manufacturing, involving companies including IBM, GlobalFoundries, Samsung, and Taiwan Semiconductor, among others. The "Fab 8" campus of GlobalFoundries, a company specializing in the semiconductor industry, is a multibillion-dollar venture being developed in Saratoga County. 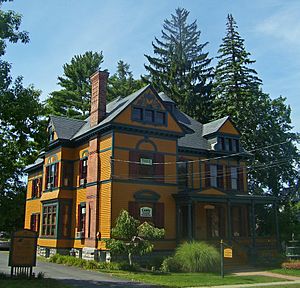 When counties were established in the Province of New York in 1683, the present Saratoga County was part of Albany County. This was an enormous county, including the northern part of New York State as well as all of the present State of Vermont and, in theory, extending westward to the Pacific Ocean. This large county was progressively reduced in size by the separation of several counties until 1791, when Saratoga County as well as Rensselaer County were split off from Albany County. The Battles of Saratoga (September 19 and October 7, 1777) marked the climax of the Saratoga campaign, giving a decisive victory to the Americans over the British in the American Revolutionary War.

During the nineteenth century, Saratoga County was an important industrial center. Its location 30 miles north of Albany on the Delaware and Hudson Railway, as well as its proximity to water power from the Hudson River and the Kayaderosseras Creek, led to rapid industrial development beginning in the early nineteenth century. Some of the most important industrial employers were paper mills, tanneries, foundries, and textile mills.

Since the construction of the Adirondack Northway in the 1960s, Saratoga County has consistently been the fastest-growing county in the Capital District and indeed, in Upstate New York, and one of the fastest-growing in the U.S. Northeast. The county has historically maintained a low county tax rate; according to its official website, Saratoga County levies one of the lowest county tax rates in New York State.

Saratoga County is situated in the eastern portion of New York State, north of Albany, northwest of Troy, and east of Utica. According to the U.S. Census Bureau, the county has a total area of 844 square miles (2,190 km2), of which 810 square miles (2,100 km2) is land and 34 square miles (88 km2) (4.0%) is water. The Hudson River forms the eastern border of the county, while the Mohawk River demarcates its southern border. The highest elevation in Saratoga County is at the peak of Hadley Mountain in the Adirondack Mountains, at 2,675 feet (815 meters), while the lowest elevation is 69 feet (21 meters), at the waterfront of the Village of Waterford, at the confluence of the Mohawk and Hudson rivers. 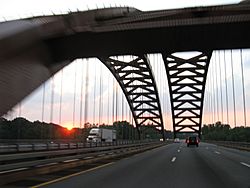 The Thaddeus Kosciusko Bridge, crossing the Mohawk River, is the portion of the toll-free, six-lane Adirondack Northway that connects Halfmoon in Saratoga County to Colonie in Albany County. 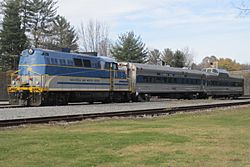 A Saratoga and North Creek Railway train at the Saratoga Springs Amtrak station. This railway service operates between Saratoga County and the Adirondack Park.

The toll-free, six-lane Adirondack Northway bisects Saratoga County, running in a south-north direction. This highway, designated Interstate 87, is the primary conduit connecting the capital of New York State, Albany, northward across the Thaddeus Kosciusko Bridge into and through Saratoga County, then past Lake George in the Adirondack Park, through the Adirondack Mountains, and eventually to the Canada–United States border, where it continues seamlessly as Quebec Autoroute 15 to Montreal. This freeway has been a major catalyst for the growth of population and commerce in Saratoga County.

The following public-use airports are located in Saratoga County: 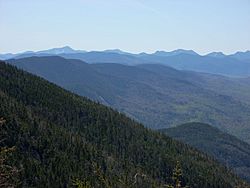 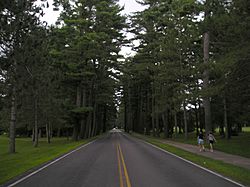 Towering trees line the Avenue of the Pines in Saratoga Spa State Park. 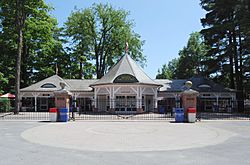 An entrance to the Saratoga Race Course in Saratoga Springs. 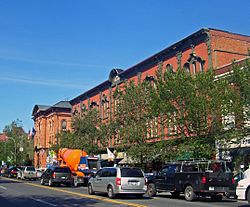 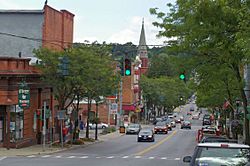 The historic Village of Ballston Spa is the county seat of Saratoga County. 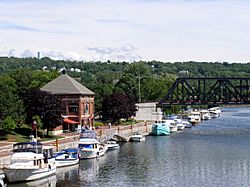 Waterford Harbor at the Village of Waterford, on the Mohawk River 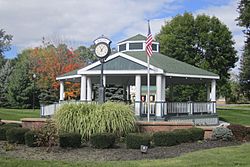 The Town of Malta, home to the "Fab 8" campus of GlobalFoundries, a semiconductor foundry. 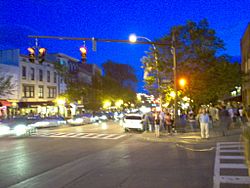 Nightlife on Broadway in Saratoga Springs.

Saratoga County is extremely popular between late July and early September each year due to the Saratoga Race Course being open. This world-famous track dates back to 1863. Thoroughbred horse racing in the United States has its own Hall of Fame in Saratoga Springs, which honors remarkable horses, jockeys, owners, and trainers. Horse-racing fans come from all over to watch the races.

The Saratoga National Historical Park is located along the Hudson River in Stillwater, and features a drive-around trail where one can drive up to each station. The park is also famous for its outstanding views of the area's natural scenery and Vermont's Green Mountains in the distance.

Saratoga County serves as the southern gateway to the Adirondack Park, the largest park in the contiguous United States, covering approximately 6.1 million acres (2.5×10^6 ha), a land area roughly the size of Vermont and greater than the areas of the National Parks of Yellowstone, Grand Canyon, Glacier, and Great Smoky Mountains combined. A portion of northwestern Saratoga County lies within the boundaries of the Adirondack Park and includes Hadley Mountain.

All content from Kiddle encyclopedia articles (including the article images and facts) can be freely used under Attribution-ShareAlike license, unless stated otherwise. Cite this article:
Saratoga County, New York Facts for Kids. Kiddle Encyclopedia.