Kids Encyclopedia Facts
Not to be confused with the county with the same name or the adjoining city of Saratoga Springs. 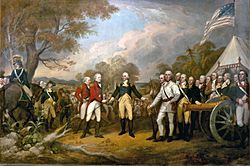 Burgoyne surrenders to Gates after the Battles

Saratoga is a town in Saratoga County, New York, United States. The population was 5,141 at the 2000 census. It is also the commonly used, but not official, name for the neighboring and much more populous city, Saratoga Springs. The major village in the town of Saratoga is Schuylerville which is often, but not officially, called Old Saratoga. Saratoga contains a second village named Victory.

Saratoga is a corruption of a Native American word from the Mohawk language. It was the name of Indian hunting grounds located along both sides of the Hudson River. According to unnamed sources, it derives from 'Se-rach-ta-gue' meaning 'the hillside country of the quiet river'; however, according to Mithun, it is derived from sharató:ken, which means "where you get a blister on your heels."

Saratoga is located on the eastern border of the county and is located east of Saratoga Springs, and is bordered by Saratoga Lake and the Hudson River.

The name may derive from the Iroquoian "Se-rach-ta-gue or Sa-ra-ta-ke," which the early Dutch settlers rendered as "Sarachtoge". A second early version of the name is, "Saraghtogo" but the origin remains unproven and thus uncertain.

The location was first settled at the end of the 17th Century as "Fort Saratoga". Saratoga soon became contested land between British and French colonial forces, and the village of Saratoga (now Schuylerville) was destroyed by the French in 1745 during King George's War.

Saratoga was originally a district of Albany County stretching from north of the Mohawk River to Northumberland, including lands for six miles on both sides of the Hudson River. In 1775, there were three district – Ballstown, Halfmoon and Saratoga.

It is best known as the location that British General John Burgoyne surrendered to American General Horatio Gates at the end of the Battles of Saratoga on October 17, 1777, often cited as the turning point for the United States during the American Revolutionary War. Much of the fighting took place in the town of Stillwater to the south, however the final seven days of the Battles and the actual sword surrender took place in Saratoga (Schuylerville).

The Saratoga Race Course in the adjoining city of Saratoga Springs is the oldest operating sports venue in the country.

There were 2,026 households out of which 31.5% had children under the age of 18 living with them, 54.9% were married couples living together, 9.4% had a female householder with no husband present, and 31.5% were non-families. 24.5% of all households were made up of individuals and 9.7% had someone living alone who was 65 years of age or older. The average household size was 2.51 and the average family size was 3.00.

Communities and locations in Saratoga

All content from Kiddle encyclopedia articles (including the article images and facts) can be freely used under Attribution-ShareAlike license, unless stated otherwise. Cite this article:
Saratoga, New York Facts for Kids. Kiddle Encyclopedia.