Another Victory is a town in Cayuga County, New York.

Victory is a village in Saratoga County, New York, United States. The population was 544 at the 2000 census. The village is located in the northeast part of the town of Saratoga, southwest of and bordering the village of Schuylerville. Victory is one of the smallest villages in New York. 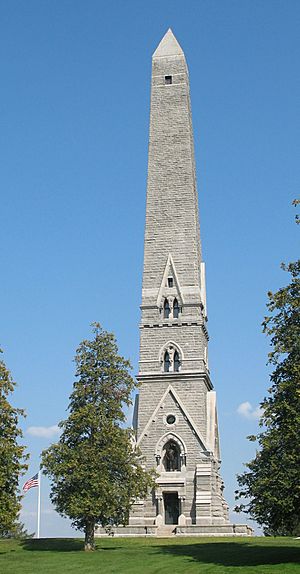 The Saratoga Monument commemorates the surrender of the British General Burgoyne to American General Gates, an event that historians note as the "Turning Point of the American Revolution."

The village was incorporated in 1849. The name Victory is most certainly due to the defeat of the British at the Battles of Saratoga, where Burgoyne surrendered his sword to Gates.

The village has also been called "Victory Mills" due to the large (now defunct) cotton mill of the Saratoga Victory Manufacturing Company. The company operated there from 1846 to 1929 and was centrally located on the primary road through town, Gates Avenue. The US Postal Service refers to the village's ZIP code as Victory Mills.

The Victory Mills building was listed on the National Register of Historic Places on January 19, 2010.

According to the United States Census Bureau, the village has a total area of 0.5 square miles (1.4 km²), all of it land.

The village is located on the north bank of Fish Creek, a tributary of the nearby Hudson River.

There were 189 households out of which 46.6% had children under the age of 18 living with them, 54.5% were married couples living together, 13.8% had a female householder with no husband present, and 23.8% were non-families. 18.5% of all households were made up of individuals and 10.1% had someone living alone who was 65 years of age or older. The average household size was 2.88 and the average family size was 3.19.

All content from Kiddle encyclopedia articles (including the article images and facts) can be freely used under Attribution-ShareAlike license, unless stated otherwise. Cite this article:
Victory, Saratoga County, New York Facts for Kids. Kiddle Encyclopedia.