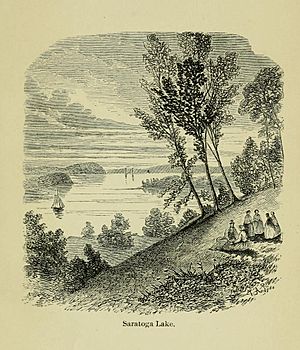 The name Saratoga is said to derive from the native Se-rach-ta-gue, meaning hillside country of the great river; however several completely different interpretations have been proposed.

Archeological evidence shows Native American occupation dating back to 7000BC.

The first European to visit the lake may have been the Jesuit Isaac Jogues in 1642. The Saint Isaac Jogues Chapel, on the Lake in Stillwater, commemorates his mission.

The sport of rowing has a long history on Saratoga Lake, especially along Fish Creek. "In July 1874, the Rowing Association of American Colleges hosted the University Race for the Championship at Saratoga." Columbia won what was reported as "the most exciting race ever witnessed." Other participants were Wesleyan, Harvard, Williams, Cornell, Dartmouth, Princeton, Trinity, and Yale. Competitions were held annually thereafter for several years.

This tradition was revived in 1986 with the first Head of the Fish Regatta which, by 2010, had grown to be "the second largest regatta in the country, by volume of boats entered."

The north end of the lake, around Fish Creek, contains a public boat launch and many private marinas while the middle and southern areas are less densely developed.

All content from Kiddle encyclopedia articles (including the article images and facts) can be freely used under Attribution-ShareAlike license, unless stated otherwise. Cite this article:
Saratoga Lake Facts for Kids. Kiddle Encyclopedia.