Crescent is a hamlet in the town of Halfmoon, New York. It lies on the north bank of the Mohawk River in Saratoga County. 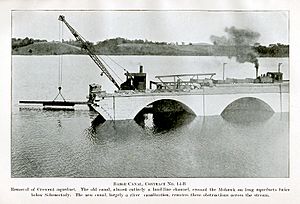 Dismantling the Crescent agueduct in 1915.

Crescent was the northern terminus of an aqueduct which carried the Erie Canal over the Mohawk River. The original wooden aqueduct was built in 1825. The 26-arched stone aqueduct which replaced the wooden structure, was demolished in 1918 and only fragments of the stone piers remain.

In the 1840s the cheap transportation provided by the canal spurred economic development in Crescent. Industry including a paint works, an iron foundry, and brickworks, located there, and businesses supplying the canal boats prospered. Grain was transhipped at Crescent; it was said "teams in a line half a mile long having been seen waiting for a chance to unload." In 1860 the population was 593.

Today Crescent is the location of the Crescent Bridge carrying U.S. Route 9 from Albany County.

All content from Kiddle encyclopedia articles (including the article images and facts) can be freely used under Attribution-ShareAlike license, unless stated otherwise. Cite this article:
Crescent, New York Facts for Kids. Kiddle Encyclopedia.