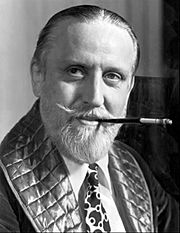 Monty Woolley (Edgar Montillion Woolley; August 17, 1888 – May 6, 1963) was an American actor and entertainer. At the age of 50, he became famous for his best-known role in the stage play and 1942 movie The Man Who Came to Dinner. His well-known white beard was "his trademark" and he was later known as "The Beard."

Woolley was born on August 17, 1888 in New York City, New York. He studied at Yale University and at Harvard University. Woolley was a closeted gay man. Woolley died on May 6, 1963 from a heart attack and from complications of kidney failure in Albany, New York, aged 75. He is buried at the Greenridge Cemetery in Saratoga Springs, New York.

All content from Kiddle encyclopedia articles (including the article images and facts) can be freely used under Attribution-ShareAlike license, unless stated otherwise. Cite this article:
Monty Woolley Facts for Kids. Kiddle Encyclopedia.