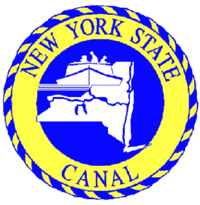 The New York State Canal System (formerly known as the New York State Barge Canal) is a successor to the Erie Canal and other canals within New York. Currently, the 525-mile (845 km) system is composed of the Erie Canal, the Oswego Canal, the Cayuga–Seneca Canal, and the Champlain Canal. In 2014 the system was listed as a national historic district on the National Register of Historic Places in its entirety, and in 2016 it was designated a National Historic Landmark.

In 1903 New York State legislature authorized construction of the "New York State Barge Canal" as the "improvement of the Erie, the Oswego, the Champlain and the Cayuga and Seneca Canals". In 1905, construction of the Barge Canal began; it was completed in 1918, at a cost of $96.7 million. It opened to through traffic May 15, 1918. The Barge Canal's new route took advantage of rivers (such as the Mohawk River, Oswego River, Seneca River, Genesee River and Clyde River) that the original Erie Canal builders had avoided, thus bypassing some major cities formerly on the route, such as Syracuse and Rochester. However, particularly in western New York State, the canal system uses the same (enlarged) channel as the original Erie Canal. In 1924 the Barge Canal built the Gowanus Bay Terminal in Brooklyn to handle canal cargo. 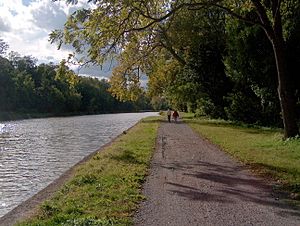 Since the 1970s, the state has ceased modernizing the system due to the shift to truck transport. The canal is preserved primarily for historical and recreational purposes. Today, very few commercial vessels use the canal; it is mainly used by private pleasure boats, although it also serves as a method of controlling floods. The last regularly scheduled commercial ship operating on the canal was the Day Peckinpaugh, which ceased operation in 1994.

Since 1992, the Barge Canal is no longer known by that name. Individual canals in the New York State Canal System, formerly collectively known as "the Barge Canal," are now referred to by their original names (Erie Canal, Oswego Canal, Cayuga–Seneca Canal, and Champlain Canal). Today, the system's canals are 12 feet (3.7 m) deep and 120 feet (37 m) wide, with 57 electrically operated locks, and can accommodate vessels up to 2,000 tons (1,800 metric tons). The canal system is open for navigation generally from May 1 through November 15. Payment of a fee for a permit is required to traverse the locks and lift bridges with motorized craft. 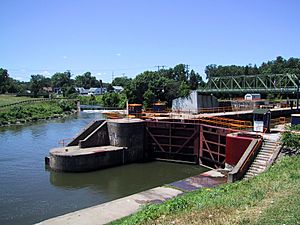 Travel on the Canal's middle section (particularly in the Mohawk River valley) was severely hampered during destructive flooding in Upstate New York in late June and early July 2006. Flood damage to the canal system and its facilities was estimated to be at least $15 million.

At the end of August 2011 Tropical Storm Irene caused closure of almost the entire canal due to flooding. At the beginning of September 2011, Tropical Storm Lee added more flooding to the system. Damage to several locks was severe enough to close the canal from Lock 8 (Scotia) through Lock 17 (Little Falls) from late August. The canal was fully open for the start of the 2012 navigation season.

An August 2012 report by state Comptroller Thomas DiNapoli said the canal system "contributed to the deterioration of the Authority's financial condition over the past decade", even as canal traffic had dropped nearly one-third since the period immediately before the Thruway Authority assumed control.

All content from Kiddle encyclopedia articles (including the article images and facts) can be freely used under Attribution-ShareAlike license, unless stated otherwise. Cite this article:
New York State Canal System Facts for Kids. Kiddle Encyclopedia.