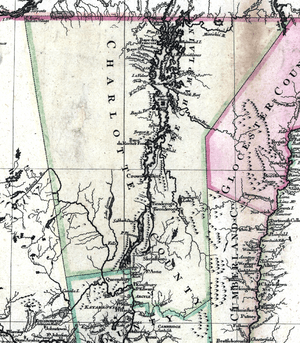 Charlotte County was a county in the colonial Province of New York in the British American colonies. It was created from Albany County on March 24, 1772. The county was named for Charlotte, Princess Royal, oldest daughter and fourth child of George III of the United Kingdom. Its boundaries extended far further than any current county. Its western boundary ran "from the Mohawk River to the Canada line, at a point near the old village of St. Regis and passing south to the Mohawk between Schenectady and Albany." Its southern boundary was near present-day Saratoga Springs. Much of western Vermont, then claimed by New York, was also part of the county. Its northern border was also the Canada–US border. Its county seat was Fort Edward.

All content from Kiddle encyclopedia articles (including the article images and facts) can be freely used under Attribution-ShareAlike license, unless stated otherwise. Cite this article:
Charlotte County, Province of New York Facts for Kids. Kiddle Encyclopedia.