Kids Encyclopedia Facts
For the village of the same name located partly in this town, see Cambridge (village), New York.

Cambridge is a town in Washington County, New York, United States. It is part of the Glens Falls Metropolitan Statistical Area. The town population was 2,152 at the 2000 census.

The town of Cambridge contains part of a village, also called Cambridge.

The town of Cambridge, formerly in Albany County, New York, was transferred to Washington County in 1791. Cambridge was home to the Cambridge Hotel, the anecdotal originator of Pie a la Mode.

Part of the south town line is the border of Rensselaer County.

Places in the Town of Cambridge 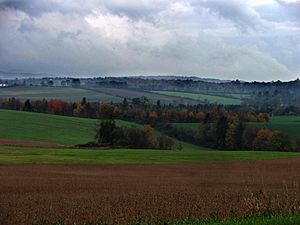 There were 795 households out of which 35.7% had children under the age of 18 living with them, 62.5% were married couples living together, 7.0% had a female householder with no husband present, and 26.8% were non-families. 22.0% of all households were made up of individuals and 10.4% had someone living alone who was 65 years of age or older. The average household size was 2.60 and the average family size was 3.04.

All content from Kiddle encyclopedia articles (including the article images and facts) can be freely used under Attribution-ShareAlike license, unless stated otherwise. Cite this article:
Cambridge, New York Facts for Kids. Kiddle Encyclopedia.