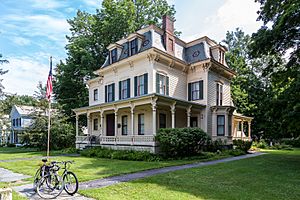 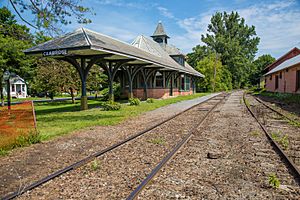 The settlement is named after Cambridge in England.

The town and village named Cambridge were once in Albany County, New York, but were transferred to Washington County in 1791.

Hubbard Hall in Cambridge is an 1878 Victorian Opera House, a contributing property to the Cambridge Historic District located on East Main street. It fell into disuse in the 1920s, but was purchased in 1977 by a group of people including Benjie White, who restored it and operated it as a concert venue and, with an expansion in 2000, as a community arts center with theatre, music, dance and visual arts classes and performances. After 37 years, White stepped down as director in the summer of 2014, and was succeeded by David Snider, who left a position as director of artistic programming at the Arena Stage in Washington, D.C.

According to the United States Census Bureau, the village has a total area of 1.7 square miles (4.3 km²). None of the area is covered with water.

Besides being in two towns (Cambridge and White Creek), the village is at the border of the Town of Jackson.

There were 755 households, out of which 32.3% had children under the age of 18 living with them, 47.8% were married couples living together, 11.5% had a female householder with no husband present, and 36.8% were non-families. 32.8% of all households were made up of individuals, and 17.0% had someone living alone who was 65 years of age or older. The average household size was 2.36 and the average family size was 2.97.

Cambridge Central School, rebuilt in 1950 after a devastating fire, was the site of the Norman Rockwell painting “Triumph in Defeat,” which appeared on the cover of the Saturday Evening Post on May 23, 1953.

In the 2016-17 school year, every fall and winter sports team was a Scholar Athlete Team.

All content from Kiddle encyclopedia articles (including the article images and facts) can be freely used under Attribution-ShareAlike license, unless stated otherwise. Cite this article:
Cambridge (village), New York Facts for Kids. Kiddle Encyclopedia.