Bennington County is a county in the U.S. state of Vermont. As of the 2020 census, the population was 37,347. The shire towns (county seats) are jointly Bennington ("The Southshire") and Manchester ("The Northshire"), and the largest municipality is Bennington. The county was created in 1778.

Bennington is the oldest county in Vermont still in existence, created by the first general assembly on 17 March 1778. Vermont was organized into two original counties, with Bennington in the west and Unity (a few days later renamed Cumberland) in the east. On 16 February 1781 Rutland County was created from Bennington County. On 13 April 1781 Bennington gained the gore east of the town of Bromley (now Peru) from Windham and Windsor Counties.

From 26 June 1781 until 23 February 1782, Vermont attempted to annex part of New York east of the Hudson River (the so-called West Union); inhabitants in the area favored Vermont's township form of government, while Vermont hoped to gain bargaining power through expansion. New York did not lose control of the area. For almost seven months Bennington County overlapped part of Albany County, New York. 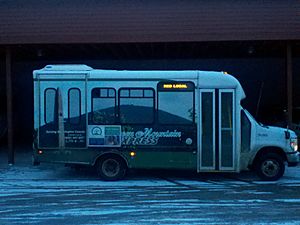 Bennington County is crossed by:

The main public transportation provider in Bennington County is the Green Mountain Community Network, whose Green Mountain Express bus system has five local bus routes in and around the town of Bennington and three commuter routes to Manchester; Wilmington; Williamstown, Massachusetts; and points in between as of September 29, 2014. Readsboro is served out of Wilmington by Southeast Vermont Transit's (formerly the Deerfield Valley Transit Association) fare free MOOver bus. There are also commuter buses to Rutland from Manchester and a regional bus line to Albany, New York from Bennington via Marble Valley Regional Transit District and Yankee Trails World Travel, respectively. Premier Coach's Vermont Translines (a partner of Greyhound) also stops in Bennington and Manchester on its intercity bus route between Albany and Burlington.

William H. Morse State Airport is a small public-use and state-owned airport west of downtown Bennington, serving private aviation interests. Commercial airlines are available at Albany International Airport to the west in the state of New York, and to the north at Rutland Southern Vermont Regional Airport in Rutland County. 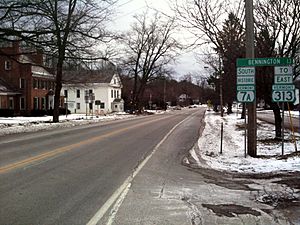 Villages are census divisions, but have no separate corporate existence from the towns they are in.

Bennington is home to Bennington College and Southern Vermont College. The Community College of Vermont and Vermont Technical College also have campuses in downtown Bennington.

Bennington County is home to these high schools:

All content from Kiddle encyclopedia articles (including the article images and facts) can be freely used under Attribution-ShareAlike license, unless stated otherwise. Cite this article:
Bennington County, Vermont Facts for Kids. Kiddle Encyclopedia.