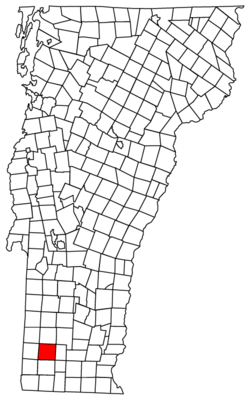 Glastenbury is a town in Bennington County, Vermont, United States. The town was unincorporated by an act of the state legislature in 1937, and is now essentially a ghost town. The population was 9 at the 2020 census. Along with Somerset, Glastenbury is one of two Vermont towns where the population levels have dropped so low that the town is unincorporated. The town has no local government and the town's affairs are handled by a state-appointed supervisor.

Glastenbury is located in central Bennington County and is bordered by the town of Sunderland to the north, Shaftsbury to the west, Woodford to the south, and Somerset in Windham County to the east. Most of the town is part of the Green Mountain National Forest. The highest point in town, near the town's geographic center, is 3,748-foot (1,142 m) Glastenbury Mountain. The Long Trail and Appalachian Trail traverse the town from its north to south border, following the crest of the Green Mountains.

Glastenbury was first chartered in 1761 by New Hampshire Governor Benning Wentworth, but settlers did not begin trickling into this rocky, forbidding mountainous area for some years after. At the time of Vermont's first census as a new state in 1791, only six families inhabited it. These first settlers found life on Glastenbury Mountain difficult, as would residents ever after, and by 1800 they had been replaced by eight entirely different families. Of these eight, only three would stay on until the next census ten years later, and only one of these would remain in later decades.

Despite the many hardships that greeted Glastenbury settlers, newcomers continued to arrive in small numbers, and the population grew slowly to 76 in 1810. But the years following 1810 were hard ones for all of Vermont, and by 1840 there were only 53 left in Glastenbury. After the Civil War, Glastenbury finally began to experience more rapid growth. Business interests in nearby Bennington were eager to take advantage of the vast timber resources there, and by 1872 had finally begun construction on a railroad (trolley) which ran up the mountain. The line ran along Bolles Brook and terminated at the place where the brook forked. It was an improbable achievement, with some parts of the line climbing as much as 250 feet (76 m) in altitude per mile. Remains of the old trolley tracks can still be seen today.

Meanwhile, the population had grown to 199 in 1870, and to 241 in 1880. This includes only the enumerated population; there were many more transient workers who were drawn to the mountain to work in the then-booming logging business. Two additional sawmills were built in the 1870s, one at the original settlement, called Fayville, and one at the new settlement at the railroad terminus, which became known as South Glastenbury. Dozens of kilns were built at South Glastenbury for converting the lumber to charcoal; at this time Glastenbury was one of the three foremost sites in Vermont for producing the charcoal which was feeding iron production in nearby Shaftsbury and in Troy, New York.

By the late 1880s, however, the mountain had been cleared of nearly all of its mature trees, and the town's economy dipped dramatically. In 1889 the railroad operation ceased. It was revived briefly in 1894 as an electric passenger trolley run by the Bennington & Woodford Railroad, and a brief and initially promising effort was made to convert South Glastenbury to a tourist attraction. A small fortune was spent to convert the area into a mountain resort area which opened in the summer of 1898. Unfortunately, a freshet wiped out the railroad tracks that winter, marking the beginning of the end of Glastenbury as a functioning town. Population dwindled in the early twentieth century, down to only seven in 1937, when the legislature unincorporated the town.

There were 6 households, out of which 33.3% had children under the age of 18 living with them, 66.7% were married couples living together, 16.7% had a female householder with no husband present, and 16.7% were non-families. No households were made up of individuals. The average household size was 2.67 and the average family size was 2.60.

All content from Kiddle encyclopedia articles (including the article images and facts) can be freely used under Attribution-ShareAlike license, unless stated otherwise. Cite this article:
Glastenbury, Vermont Facts for Kids. Kiddle Encyclopedia.