Manchester is a town in, and one of two shire towns (county seats) of, Bennington County, Vermont, United States. The population was 4,484 at the 2020 census.

Manchester Village, an incorporated village, and Manchester Center are settlement centers within the town.

Manchester has become a tourist destination, especially for those from New York and Connecticut, offering visitors factory outlet stores of national chain retailers such as Brooks Brothers, Kate Spade and Ralph Lauren, as well as many locally owned businesses, including the Northshire Bookstore, an independent bookstore.

The winter sports area of Stratton Mountain Resort is nearby to the east. 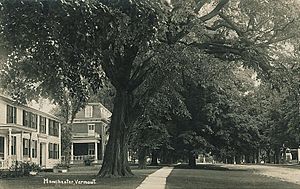 The town was one of several chartered in 1761 by Benning Wentworth, colonial governor of New Hampshire. It was his custom to name new towns after prominent English aristocrats of the day, hoping they might adopt a patronly interest in their namesakes. Wentworth named Manchester for Robert Montagu, 3rd Duke of Manchester. First settled in 1764, the town was laid out in 1784. The land was better suited for grazing than tillage, so by 1839 about 6,000 sheep roamed the pastures and hillsides.

Other industries came to include iron mines, marble quarries and mills, and lumber companies. The arrival of the railroad from industrialized centers like New York City brought tourists, drawn by Manchester's historic architecture and beautiful setting among mountains. Following the Civil War, the town developed into an affluent resort area, which it remains today.

Between 1812 and 1819 Manchester was made famous by the Boorn–Colvin case, called "America's first wrongful conviction murder case", the subject of several books and still studied today.

In 1850 Ward Manor was built on the now Ward-Equinox Estate on the 200 Acre well known Equinox Mountain. Bought by Rutherford Ward from Poplar Bluff, Missouri he moved here as threats of a Civil War was being whispered through the south and the southern part of the mid-west. It is the only brick structure ever to be built in the town's history. It was abandoned until 1950 when Rutherford's grandson the well known Industrialist Farmer, Dewey H. Ward renovated it and called it home during the summers. When he passed in 2002 it was left to his daughter well known jeweler and founder of Marchesa Jewelry, Louise O'Kief-Trout and his great grandson Nicholas Silvestri.

Orvis is a family-owned retail and mail-order business specializing in high-end fly fishing, hunting and sporting goods. Founded in Manchester in 1856 by Charles F. Orvis to sell fishing tackle, it is the oldest mail-order retailer in the United States.

Jake Burton Carpenter, founder of Burton Snowboards, perfected snowboard design in his garage in Manchester. The company operated out of Manchester until 1992, when it relocated to Burlington, Vermont.

Manchester is located in north-central Bennington County, lying between the Green Mountains to the east and the Taconic Range to the west. Equinox Mountain, the highest summit in the Taconics, with an elevation of 3,850 feet (1,170 m), is in the western part of the town. Manchester is drained by the Batten Kill, Lye Brook, Munson Brook, Bromley Brook, and Bourn Brook. The Lye Brook Falls Hiking Trail which leads to one of the highest waterfalls in Vermont is a popular local attraction.

There were 1,819 households, out of which 28.5% had children under the age of 18 living with them, 51.5% were married couples who were living together, 9.5% had a female householder with no husband present, and 36.4% were non-families. Of all households 30.5% were made up of individuals, and 14.0% had someone living alone who was 65 years of age or older. The average household size was 2.26 and the average family size was 2.81.

Manchester is crossed by four highways, including one Super-2 freeway. They are:

VTrans and NYSDOT have shown interest in restoring passenger train service to Manchester on a new Amtrak route between Albany and Burlington via Rutland, also linking up nearby Mechanicville, New York and North Bennington, Vermont. The new train would share much of its route with the Ethan Allen Express, likely running beyond Albany to New York City. As of 2021, the idea is listed simply as a "potential initiative" in the Vermont Rail Plan.

All content from Kiddle encyclopedia articles (including the article images and facts) can be freely used under Attribution-ShareAlike license, unless stated otherwise. Cite this article:
Manchester, Vermont Facts for Kids. Kiddle Encyclopedia.