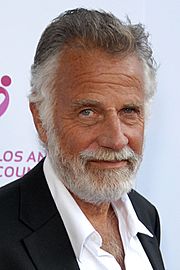 Jonathan Goldsmith (born September 26, 1938) or Jonathan Lippe is an American movie, television, stage, and voice actor. He is known for playing "The Most Interesting Man in the World" in the Dos Equis commercials starting in 2007.

Goldsmith was born in September 26, 1938 in New York City, New York to a Jewish family. He studied at Boston University. He was married to Barbara Goldsmith since 2006. He now lives in Marina del Rey, California and in Manchester, Vermont.

All content from Kiddle encyclopedia articles (including the article images and facts) can be freely used under Attribution-ShareAlike license, unless stated otherwise. Cite this article:
Jonathan Goldsmith Facts for Kids. Kiddle Encyclopedia.