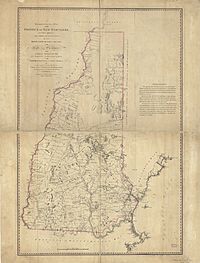 Topographical map of the province

The Province of New Hampshire was a colony of England and later a British province in North America. The name was first given in 1629 to the territory between the Merrimack and Piscataqua rivers on the eastern coast of North America, and was named after the county of Hampshire in southern England by Captain John Mason, its first named proprietor. In 1776 the province established an independent state and government, the State of New Hampshire, and joined with twelve other colonies to form the United States.

Europeans first settled New Hampshire in the 1620s, and the province consisted for many years of a small number of communities along the seacoast, Piscataqua River, and Great Bay. In 1641 the communities were organized under the government of the Massachusetts Bay Colony, until Charles II issued a colonial charter for the province and appointed John Cutt as President of New Hampshire in 1679. After a brief period as a separate province, the territory was absorbed into the Dominion of New England in 1686. Following the collapse of the unpopular Dominion, on October 7, 1691 New Hampshire was again separated from Massachusetts and organized as an English crown colony. Its charter was enacted on May 14, 1692, during the coregency of William and Mary, the joint monarchs of England, Scotland, and Ireland. Between 1699 and 1741, the province's governor was often concurrently the governor of the Province of Massachusetts Bay. This practice ended completely in 1741, when Benning Wentworth was appointed governor. Wentworth laid claim on behalf of the province to lands west of the Connecticut River, east of the Hudson River, and north of Massachusetts, issuing controversial land grants that were disputed by the Province of New York, which also claimed the territory. These disputes resulted in the eventual formation of the Vermont Republic and the US state of Vermont.

The province's economy was dominated by timber and fishing. The timber trade, although lucrative, was a subject of conflict with the crown, which sought to reserve the best trees for use as ship masts. Although the Puritan leaders of Massachusetts ruled the province for many years, the New Hampshire population was more religiously diverse, originating in part in its early years with refugees from opposition to religious differences in Massachusetts.

From the 1680s until 1760, New Hampshire was often on the front lines of military conflicts with New France and the Abenaki people, seeing major attacks on its communities in King William's War, Dummer's War, and King George's War. The province was at first not strongly in favor of independence, but with the outbreak of armed conflict at Lexington and Concord many of its inhabitants joined the revolutionary cause. After Governor John Wentworth fled New Hampshire in August 1775, the inhabitants adopted a constitution in early 1776. Independence as part of the United States was confirmed with the 1783 Treaty of Paris.

Prior to English colonization, the area that is now northeastern New England was populated by bands of the Abenaki, who lived in sometimes-large villages of longhouses. Depending on the season, they would either remain near their villages to fish, gather plants, engage in sugaring, and trade or fight with their neighbors, or head to nearby fowling and hunting grounds; later they also farmed tobacco and the "three sisters": corn, beans, and squash. The seacoast was explored in the early years of the 17th century by English and French explorers, including Samuel de Champlain and John Smith.

Permanent English settlement began after land grants were issued in 1622 to John Mason and Sir Ferdinando Gorges for the territory between the Merrimack and Sagadahoc (Kennebec) rivers, roughly encompassing present-day New Hampshire and western Maine. Settlers, whose early leaders included David Thomson, Edward Hilton, and Thomas Hilton, began settling the New Hampshire coast as early as 1623, and eventually expanded along the shores of the Piscataqua River and the Great Bay. These settlers were mostly intending to profit from the local fisheries. Mason and Gorges, neither of whom ever came to New England, divided their claims along the Piscataqua River in 1629. Mason took the territory between the Piscataqua and Merrimack, and called it "New Hampshire", after the English county of Hampshire.

Conflicts between holders of grants issued by Mason and Gorges concerning their boundaries eventually led to a need for more active management. In 1630, Captain Walter Neale was sent as chief agent and governor of the lower settlements on the Piscataqua (including Strawbery Banke, present-day Portsmouth), and in 1631 Captain Thomas Wiggin was sent to govern the upper settlements, comprising modern-day Dover, Durham and Stratham. After Mason died in 1635, the colonists and employees of Mason appropriated many of his holdings to themselves. Exeter was founded in 1638 by John Wheelwright, after he had been banished from the neighboring Massachusetts Bay Colony for defending the teachings of Anne Hutchinson, his sister-in-law. In the absence of granting authority from anyone associated with the Masons, Wheelwright's party purchased the land from local Indians. His party included William Wentworth, whose descendants came to play a major role in colonial history. Around the same time, others unhappy with the strict Puritan rule in Massachusetts settled in Dover, while Puritans from Massachusetts settled what eventually became Hampton.

Because of a general lack of government, the New Hampshire settlements sought the protection of their larger neighbor to the south, the Massachusetts Bay Colony. In 1641, they collectively agreed to be governed from Massachusetts, provided the towns retained self-rule, and that Congregational Church membership was not required for their voters (as it was in Massachusetts). The settlements formed part of that colony until 1679, sending representatives to the Massachusetts legislature in Boston. Mason's heirs were in the meantime active in England, seeking to regain control of their territory, and Massachusetts was coming under increasing scrutiny by King Charles II. In 1679 Charles issued a charter establishing the Province of New Hampshire, with John Cutt as its first president.

In January 1680 Cutt took office, ending Massachusetts governance. However, Cutt and his successor, Richard Waldron, were strongly opposed to the Mason heirs and their claims. Consequently, Charles issued a second charter in 1682 with Edward Cranfield as governor. Cranfield strongly supported the Mason heirs, making so many local enemies in the process that he was recalled in 1685. In 1686 the territory was brought into the Dominion of New England, an attempt to unify all of the New England colonies into a single government. The New Hampshire towns did not suffer as much under the rule of Sir Edmund Andros as did Massachusetts. After word of the Glorious Revolution reached Boston, Massachusetts authorities conspired to have Andros arrested and sent back to England. This left the New Hampshire towns without any colonial administration, just as King William's War erupted around them. Subjected to significant French and Indian raids, they appealed to Massachusetts Governor Simon Bradstreet, who oversaw them until William and Mary issued new, separate charters in 1691 for both Massachusetts and New Hampshire.

Samuel Allen, a businessman who had acquired the Mason claims, was appointed the first governor under the 1691 charter. He was equally unsuccessful in pursuing the Mason land claims, and was replaced in 1699 by the Earl of Bellomont. Bellomont was the first in a series of governors who ruled both New Hampshire and the Province of Massachusetts Bay. Until 1741 the governorships were shared, with the governor spending most of his time in Massachusetts. As a result, the lieutenant governors held significant power. The dual governorship became problematic in part because of territorial claims between Massachusetts and New Hampshire. Since the southern border of the original Mason grant was the Merrimack River, and the Massachusetts charter specified a boundary three miles north of the same river, the claims conflicted, and were eventually brought to the king's attention. In 1741, King George II decreed what is now the border between Massachusetts and New Hampshire, and separated the governorships, issuing a commission to Benning Wentworth as New Hampshire governor.

Wentworth broadly interpreted New Hampshire's territorial claims, believing that territories west of the Connecticut River belonged to New Hampshire. In a scheme that was effective at lining his own pockets, he sold land grants in this territory for relatively low prices, but required parts of the grants to be allocated to himself. These grants brought New Hampshire into conflict with the Province of New York, the other claimant to the territory. King George III in 1764 ruled in New York's favor, setting off a struggle between the holders of the New Hampshire Grants and New York authorities that eventually resulted in the formation of the state of Vermont. The controversy also resulted in the replacement of Wentworth by his nephew John, who would be the last royal governor of the province.

Since the province was on the northern frontier bordering New France, its communities were frequently attacked during King William's War and Queen Anne's War, and then again in the 1720s during Dummer's War. Because of these wars the Indian population in the northern parts of the province declined, but settlements only slowly expanded into the province's interior. The province was partitioned into counties in 1769, later than the other twelve colonies that revolted against the British Empire.

Twelve other colonies joined with New Hampshire in resisting attempts by the British Parliament to impose taxes. After the American Revolutionary War began in April 1775, the province recruited regiments that served in the Siege of Boston, and was the first former European colony to formally establish an independent government, as the State of New Hampshire, in January 1776.

Puritan mass migration to New England began following the issuance of the royal charter for the Massachusetts Bay Company by Charles I of England in 1629 and continued until the beginning of the English Civil War in 1642. Following the war's conclusion in 1651, immigration to New England leveled off and the population growth owed almost entirely to natural increase rather than immigration or slave importations for the remainder of the 17th century and through the 18th century. Mass migration from New England to the provinces of New York and New Jersey began following the surrender of New Netherland by the Dutch Republic at Fort Amsterdam in 1664, and the population of New York would continue to expand more so by in-migration by families from New England in the 18th century rather than from natural increase.

Despite the initial Puritan mass migration also having a 2:1 male sex-imbalance like the British colonization of the Chesapeake Colonies, unlike the Southern Colonies in the 17th century, most Puritan immigrants to New England migrated as families (as approximately two-thirds of the male Puritan immigrants to New England were married rather than unmarried indentured servants), and in late 17th century New England, 3 percent of the population was over the age of 65 (while only 1 percent in the Chesapeake was in 1704). By the American Revolutionary War, only two percent of the New England colonial labor force were bonded or convict laborers and another two percent were black slaves, while nine percent of the colonial black population in New England were free persons of color (as compared with only three percent in the Southern Colonies). The 1783 Constitution of New Hampshire nominally abolished slavery (using language similar to a 1783 ruling by the Massachusetts Supreme Judicial Court), while the 1790 U.S. Census still counted 158 slaves in the state (or 20 percent of the black population at the time), and the 1830 and 1840 U.S. Censuses counted three slaves and one slave respectively. In 1857, the New Hampshire General Court passed a law officially ending slavery.

All content from Kiddle encyclopedia articles (including the article images and facts) can be freely used under Attribution-ShareAlike license, unless stated otherwise. Cite this article:
Province of New Hampshire Facts for Kids. Kiddle Encyclopedia.