The first known European to explore the region was Martin Pring from Bristol, England, in 1603. In 1623, William and Edward Hilton settled Cochecho Plantation, adopting its Abenaki name, making Dover the oldest permanent settlement in New Hampshire, and seventh in the United States. One of the colony's four original townships, it then included Durham, Madbury, Newington, Lee, Somersworth and Rollinsford.

The Hiltons' name survives at Hilton Park on Dover Point (which was originally known as Hilton Point), where the brothers settled near the confluence of the Bellamy and Piscataqua rivers. They were fishmongers sent from London by The Company of Laconia to establish a colony and fishery on the Piscataqua. In 1631, however, it contained only three houses. William Hilton built a salt works on the property (salt-making was the principal industry in his hometown of Northwich, England). He also served as Deputy to the General Court (the colonial legislature).

In 1633, Cochecho Plantation was bought by a group of English Puritans who planned to settle in New England, including Viscount Saye and Sele, Baron Brooke and John Pym. They promoted colonization in America, and that year Hilton's Point received numerous immigrants, many from Bristol. They renamed the settlement Bristol. Atop the nearby hill they built a meetinghouse surrounded by an entrenchment, with a jail nearby.

The town was called Dover in 1637 by the new governor, Reverend George Burdett. It was possibly named after Robert Dover, an English lawyer who resisted Puritanism. With the 1639 arrival of Thomas Larkham, however, it was renamed after Northam in Devon, where he had been preacher. But Lord Saye and Sele's group lost interest in their settlements, both here and at Saybrook, Connecticut, when their plan to establish a hereditary aristocracy in the colonies met disfavor in New England. Consequently, the plantation was sold in 1641 to Massachusetts and again named Dover.

On June 28, 1689, Dover suffered a devastating attack by Indians. It was revenge for an incident on September 7, 1676, when 400 braves were duped by Major Richard Waldron into performing a "mock battle" near Cochecho Falls. After discharging their weapons, the braves were captured. Half were sent to Massachusetts for predations committed during King Philip's War, then either hung or sold into slavery. Local braves deemed innocent were released, but considered the deception a dishonorable breach of hospitality. Thirteen years passed. When colonists thought the episode forgotten, they struck. Fifty-two colonists, a quarter of the population, were either captured or slain.

During Father Rale's War, in August and September 1723, there were Indian raids on Saco, Maine and Dover, New Hampshire. The following year Dover was raided again and Elizabeth Hanson wrote her captivity narrative. 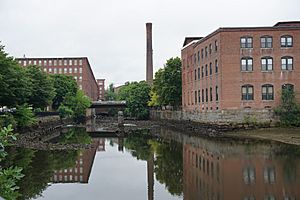 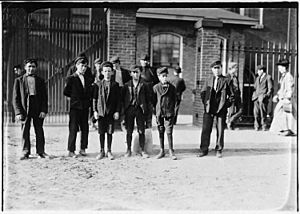 The mills were purchased in 1909 by the Pacific Mills of Lawrence, Massachusetts, which closed the printery in 1913 but continued spinning and weaving. During the Great Depression, however, textile mills no longer dependent on New England water power began moving to southern states in search of cheaper operating conditions, or simply went out of business. Dover's millyard shut in 1937, then was bought at auction in 1940 by the city itself for $54,000. There were no other bids. Now called the Cocheco Falls Millworks, its tenants include technology and government services companies, plus a restaurant. 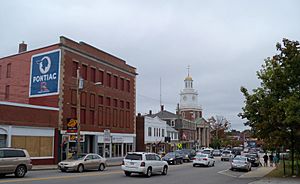 According to the United States Census Bureau, the city has a total area of 29.0 square miles (75.2 km2), of which 26.7 square miles (69.2 km2) is land and 2.3 square miles (6.0 km2) is water, comprising 7.96% of the city. Dover is drained by the Cochecho and Bellamy rivers. Long Hill, elevation greater than 300 feet (91 m) above sea level and located 3 miles (4.8 km) northwest of the city center, is the highest point in Dover. Garrison Hill, elevation approximately 290 ft (88 m), is a prominent hill rising directly above the center city, with a park and lookout tower on top. Dover lies fully within the Piscataqua River (Coastal) watershed.

The Cooperative Alliance for Seacoast Transportation (COAST) operates a publicly funded bus network in Dover and surrounding communities in New Hampshire and Maine. C&J Trailways is a private intercity bus carrier connecting Dover with other coastal New Hampshire and Massachusetts cities, including Boston. Wildcat Transit, operated by the University of New Hampshire, provides bus service to Durham, which is free for students and $1.50 for the public. Amtrak's Downeaster train service stops at the Dover Transportation Center with service to the Portland Transportation Center and Boston's North Station.

Dover was used as the fictional setting for the Hallmark Channel movie Christmas Incorporated.

All content from Kiddle encyclopedia articles (including the article images and facts) can be freely used under Attribution-ShareAlike license, unless stated otherwise. Cite this article:
Dover, New Hampshire Facts for Kids. Kiddle Encyclopedia.