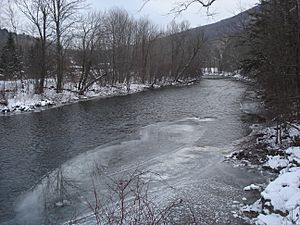 The Batten Kill as it flows through West Arlington, Vermont

The Batten Kill, Battenkill, or Battenkill River is a 59.4-mile-long (95.6 km) river rising in Vermont that flows into New York and is a tributary of the Hudson River. As "kill" means a creek, the name "Battenkill River" is pleonastic.

The mouth of the Batten Kill is in Easton, New York, and the source of the river is in East Dorset, Vermont.

The river is known for its fishing, as it has a prominent trout population. The Shushan Covered Bridge crosses it at one point, and the headquarters of the Orvis Corporation are also located along its course.

The Battenkill valley is home to the Tour of the Battenkill, the largest road cycling race in North America.

The Native American name for the river is either Dionoondehowee or Ondawa.

The Batten Kill rises in East Dorset, Vermont, and flows south with Mad Tom Brook soon joining it from the southern slope of Mount Tabor. It flows in a southwesterly direction to Arlington and then in a westerly direction, entering New York. The river continues west, forming the boundary between the towns of Jackson and Salem, turning north at the hamlet of Shushan. Turning west again at Greenwich Junction, the river becomes the boundary between Jackson and the town of Greenwich, passing the hamlets of East Greenwich, Battenville and Center Falls before reaching the village of Greenwich. The Batten Kill continues as the boundary between Greenwich and the town of Easton, past the hamlet of Middle Falls and ends at the Hudson River, at a point one mile (1.6 km) north of Schuylerville.

From source to mouth following the major windings, the river measures 59.4 miles (95.6 km). The length of the river in Vermont is approximately 28 miles (45 km).

The Vermont portion of the Batten Kill watershed is mountainous, steep and heavily forested. The tributaries are, for the most part, wooded, steep and narrow. National Forest Service land in this watershed is almost 44,000 acres (180 km2). The average yearly rainfall over the entire basin area is 42.9 inches (1,090 mm). The following river and tributary descriptions for the Vermont portion of the basin were taken in part from the United States Geological Survey publication Surface Waters of Vermont.

Mad Tom Brook rises on the southern slope of Mount Tabor in the northwestern part of the town of Peru at an altitude of 2,900 feet (880 m) above sea level. It flows southward and south-westward to East Dorset where it joins the beginning of the Batten Kill from the north. Its length is about 5.5 miles (8.9 km), and its fall is about 2,100 feet (640 m).

The Green River flows generally southward from its source, west of Manchester, passing through Sandgate, 814 feet (248 m) above sea level and winding to its junction with the Batten Kill on the south side of State Route 313 at West Arlington.

Camden Creek flows south to southwest from its source, just east of the New York state line, near West Sandgate. A little less than one mile south of its source, it is joined by Terry Brook, which flows in from the east. The creek runs south-southwest through the Camden Valley, crossing into Washington County, NY. It is joined by West Camden Creek from the north about one quarter mile from its junction with the Batten Kill on the north side of NY State Route 313, east of the hamlet of Shushan.

The Batten Kill was supposed to be a fallback point for the British General Burgoyne's forces, but was never used and thus did not play a significant role in the battle.

All content from Kiddle encyclopedia articles (including the article images and facts) can be freely used under Attribution-ShareAlike license, unless stated otherwise. Cite this article:
Batten Kill Facts for Kids. Kiddle Encyclopedia.