Greenwich is a town in the southwestern part of Washington County, New York, United States. The town is located on the western border of the county. The population was 4,896 at the 2000 census. It is part of the Glens Falls Metropolitan Statistical Area. Greenwich features several homes that were a part of the Underground Railroad.

The Town of Greenwich contains a village, also named Greenwich.

The Horicon tribe is believed to be part of the early native population of the town.

Families began settling the area around 1763. The town was originally part of five land patents: Saratoga, Kettlehuyn, Cuyler, Campbell, and Argyle. The Town of Greenwich was formed from part of the Town of Argyle in 1803. In 1809, the community of Whipple City incorporated as a village and adopted the name Union Village. In 1867, the name was changed to Greenwich.

Greenwich views itself as having been an important location along the Underground Railroad. A historical marker was placed in Mowry Park detailing the locations of former safe houses.

The Greenwich and Johnsonville Railroad brought rail service to the area in 1870.

The Coffin Site was listed on the National Register of Historic Places in 1980.

It lies within the Cambridge valley region in between the Adirondack Mountains and Green Mountain Range of Vermont.

The west town line is defined by the Hudson River with Saratoga County on the opposite shore.

New York State Route 40 (NY 40) is a north-south highway through the center of the town. NY 29 is an east-west highway located near the south town line and Batten Kill River. NY 40 and NY 29 join near Middle Falls. 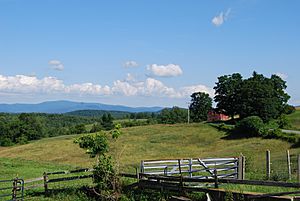 A farm in Greenwich

All content from Kiddle encyclopedia articles (including the article images and facts) can be freely used under Attribution-ShareAlike license, unless stated otherwise. Cite this article:
Greenwich (town), New York Facts for Kids. Kiddle Encyclopedia.