Chester A. Arthur facts for kids

Chester Alan Arthur (October 5, 1829 – November 18, 1886) was an American attorney and politician who served as the 21st president of the United States from 1881 to 1885. Previously the 20th vice president, he succeeded to the presidency upon the death of President James A. Garfield in September 1881, two months after Garfield was shot by an assassin. 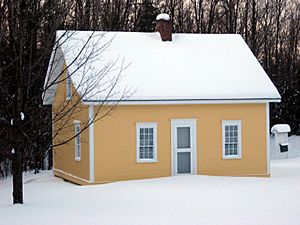 Arthur's father, William Arthur, was born in 1796 in Dreen, Cullybackey, County Antrim, Ireland to a Presbyterian family of Scots-Irish descent. Malvina Stone met William Arthur when Arthur was teaching school in Dunham, Quebec, near the Vermont border. They married in Dunham on April 12, 1821, soon after meeting. The Arthurs moved to Vermont after the birth of their first child, Regina.

Chester Alan Arthur was born in 1829 in Fairfield, Vermont and grew up in upstate New York; he was the fifth of nine children. He was named "Chester" after Chester Abell, the physician and family friend who assisted in his birth, and "Alan" for his paternal grandfather. The family remained in Fairfield until 1832, when William Arthur's profession took them to churches in several towns in Vermont and upstate New York. The family finally settled in the Schenectady, New York area.

Arthur had seven siblings who lived to adulthood: 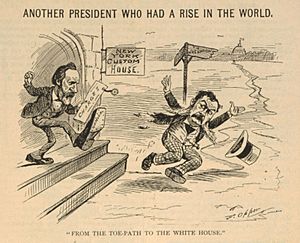 A cartoon depicting President Rutherford B. Hayes kicking Arthur out of the New York Custom House

Chester practiced law in New York City. He served as quartermaster general of the New York Militia during the American Civil War. Following the war, he devoted more time to New York Republican politics and quickly rose in Senator Roscoe Conkling's political organization. President Ulysses S. Grant appointed him to the post of Collector of the Port of New York in 1871, and he was an important supporter of Conkling and the Stalwart faction of the Republican Party. In 1878, President Rutherford B. Hayes fired Arthur as part of a plan to reform the federal patronage system in New York.

When U.S Representative James Garfield won the Republican nomination for president in 1880, Arthur was nominated for vice president to balance the successful ticket as an Eastern Stalwart. Four months into his term, an assassin shot Garfield, who died 11 weeks later. Arthur then assumed the presidency. 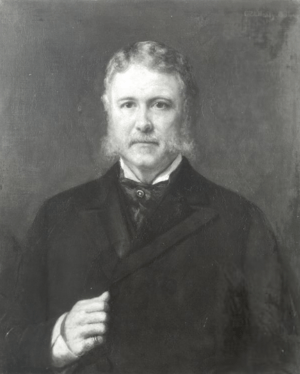 At the outset, Arthur struggled to overcome a negative reputation as a Stalwart and product of Conkling's organization. To the surprise of reformers, he advocated and enforced the Pendleton Civil Service Reform Act.

He presided over the rebirth of the US Navy, but he was criticized for failing to alleviate the federal budget surplus which had been accumulating since the end of the Civil War.

Arthur vetoed the first version of the 1882 Chinese Exclusion Act, arguing that its twenty-year ban on Chinese immigrants to the United States violated the Burlingame Treaty, but he signed a second version, which included a ten-year ban.

Suffering from poor health, Arthur made only a limited effort to secure the Republican Party's nomination in 1884, and he retired at the end of his term.

Modern historians generally rank Arthur as a mediocre president, as well as the least memorable. 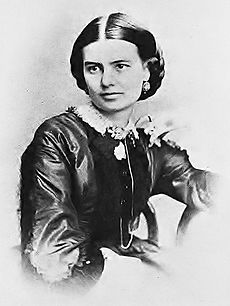 In 1856, Arthur courted Ellen Herndon, the daughter of William Lewis Herndon, a Virginia naval officer. The two were soon engaged to be married. In 1859, they were married at Calvary Episcopal Church in Manhattan. The couple had three children:

All content from Kiddle encyclopedia articles (including the article images and facts) can be freely used under Attribution-ShareAlike license, unless stated otherwise. Cite this article:
Chester A. Arthur Facts for Kids. Kiddle Encyclopedia.