Bureau of Engraving and Printing facts for kids

The Bureau of Engraving and Printing (BEP) is a government agency within the United States Department of the Treasury that designs and produces a variety of security products for the United States government, most notable of which is Federal Reserve Notes (paper money) for the Federal Reserve, the nation's central bank. In addition to paper currency, the BEP produces Treasury securities; military commissions and award certificates; invitations and admission cards; and many different types of identification cards, forms, and other special security documents for a variety of government agencies. The BEP does not produce coins; all coinage is produced by the United States Mint. With production facilities in Washington, DC, and Fort Worth, Texas, the Bureau of Engraving and Printing is the largest producer of government security documents in the United States.

The Bureau of Engraving and Printing officially took over production of postage stamps for the United States government in July 1894. Paper currency was later produced on hand presses around 1918, utilizing plates capable of printing four notes per sheet. 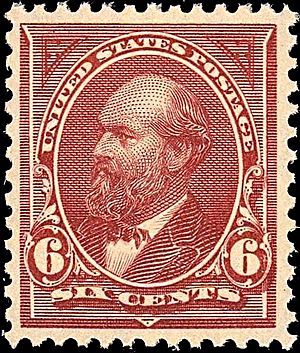 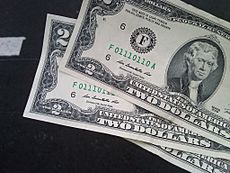 Since 1968, all currency has been printed by means of the dry intaglio process, whereby wetting of the paper prior to printing is unnecessary. In this process, fine-line engravings are transferred to steel plates from which an impression is made on sheets of distinctive paper. Ink is applied to a plate containing 32 note impressions, which is then wiped clean, leaving ink in the engraved lines.

The plate is pressed against the sheet of paper with such pressure as to actually press the paper into the lines of the plate to pick up the ink. Both faces and backs are printed in this manner – backs first. After the faces are printed, the sheets are then typographically overprinted with Treasury Seals and serial numbers.

During the Fiscal Year 2013, the Bureau delivered 6.6 billion notes at an average cost of 10 cents per note.

The Bureau of Engraving and Printing has two locations: one in Washington, DC, and another in Fort Worth, Texas.

All content from Kiddle encyclopedia articles (including the article images and facts) can be freely used under Attribution-ShareAlike license, unless stated otherwise. Cite this article:
Bureau of Engraving and Printing Facts for Kids. Kiddle Encyclopedia.