Serial number from an identity document

Sequence numbers are almost always non-negative, and typically start at zero or one.

What are serial numbers used for?

Serial numbers can be very useful for quality control. That way, if there is a problem with a certain batch of products, the serial number of one defective item can tell which items are affected by the problem. Serial numbers can also be used against stealing or imitating products, because it is possible to keep track of which serial numbers have been used. Stolen goods or those with problems can be identified more easily.

Many computer programs come with serial numbers, often called "Compact Disc keys", and the installers often require the user to enter a valid serial number to continue. These numbers are verified using a certain algorithm to avoid usage of counterfeit keys.

Serial numbers also help track down counterfeit currency, because in some countries each banknote has a unique serial number.

Certificates and Certificate Authorities (CA) are necessary for widespread use of cryptography. These depend on applying mathematically rigorous serial numbers and serial number arithmetic 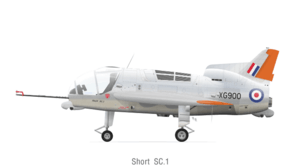 In the case of the UK Royal Air Force (RAF) the "Serial" takes the form of two letters followed by three numbers, e.g., BT308—the prototype Avro Lancaster, or XS903—an English Electric Lightning F.6 at one time based at RAF Binbrook [1]. During the Second World War RAF aircraft carrying secret equipment or that were in themselves secret had "/G" added to the end of the serial, the "G" signifying "Guard", denoting that the aircraft was to have an armed guard at all times while on the ground, e.g., LZ548/G—the prototype de Havilland Vampire jet fighter, or ML926/G—a de Havilland Mosquito XVI experimentally fitted with H2S radar. Prior to this two-letter, three-number scheme, the RAF and preceding Royal Flying Corps (RFC) utilised a serial consisting of a letter followed by four figures, e.g., D8096 - a Bristol F.2 Fighter currently owned by the Shuttleworth Collection, or K5054 - the prototype Supermarine Spitfire. The serial number follows the aircraft throughout its period of service. 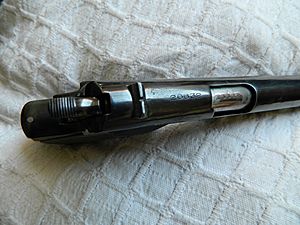 Serial number on a semi-automatic pistol

All content from Kiddle encyclopedia articles (including the article images and facts) can be freely used under Attribution-ShareAlike license, unless stated otherwise. Cite this article:
Serial number Facts for Kids. Kiddle Encyclopedia.