The United States one-dollar bill ($1) since 1876 has been the lowest value denomination of United States paper currency. An image of the first U.S. President (1789–1797), George Washington, based on the Athenaeum Portrait, a 1796 painting by Gilbert Stuart, is currently featured on the obverse, and the Great Seal of the United States is featured on the reverse. The one-dollar bill has the oldest overall design of all U.S. currency currently being produced (The current two-dollar bill obverse design dates from 1928, while the reverse appeared in 1976). The obverse design of the dollar bill seen today debuted in 1963 (the reverse in 1935) when it was first issued as a Federal Reserve Note (previously, one dollar bills were Silver Certificates).

The inclusion of the motto, "In God We Trust," on all currency was required by law in 1955, and first appeared on paper money in 1957.

Example Federal Reserve Bank Seal (for San Francisco) as it appears on a $1 bill; the number 12 appears four times to confirm.

Comparison between Gilbert Stuart's 1796 Athenaeum Portrait and the image on the obverse of the bill. The image from the dollar bill above shows the subject flipped horizontally for ease of comparison.

To the right of George Washington is the Treasury Department seal. The scales represent justice. The chevron with thirteen stars represents the original thirteen colonies. The key below the chevron represents authority and trust; 1789 is the year that the Department of the Treasury was established. The series 1969 dollar bills were the first to use a simplified Treasury seal, with the wording in English instead of Latin.

On the edges are olive branches entwined around the 1s. A small plate serial number-letter combination is on the lower right, and a small plate position (check) letter is on the upper left corner of the note. If "FW" appears before the lower right plate number it indicates that the bill was produced at the satellite Bureau of Engraving and Printing facility in Fort Worth, Texas. Currency has been printed here since Series 1988A. The absence of "FW" indicates the bill was printed at the main facility in Washington, D.C.. 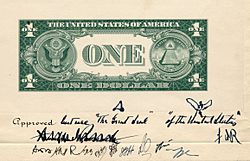 President Franklin Roosevelt's conditional approval of the one-dollar bill's design in 1935, requiring that the appearance of the sides of the Great Seal be reversed, and together, captioned.

The reverse of the one-dollar bill has an ornate design that incorporates both sides of the Great Seal of the United States to the left and right of the word ONE. This word appears prominently in the white space at the center of the bill in a capitalized, shadowed, and seriffed typeface. A smaller image of the word "ONE" is superimposed over the numeral "1" in each of the four corners of the bill.

The Great Seal, originally designed in 1782 and added to the dollar bill's design in 1935, is surrounded by an elaborate floral design. The renderings used were the typical official government versions used since the 1880s.

The reverse of the seal on the left features a barren landscape dominated by an unfinished pyramid of 13 steps, topped by the Eye of Providence within a triangle. At the base of the pyramid are engraved the Roman numerals MDCCLXXVI (1776), the date of American independence from Britain. At the top of the seal stands a Latin phrase, "ANNUIT COEPTIS," meaning "He favors our undertaking." At the bottom of the seal is a semicircular banner proclaiming "NOVUS ORDO SECLORUM" meaning "New Order of the Ages" that is a reference to the new American era. To the left of this seal, a string of 13 pearls extends toward the edge of the bill.

The obverse of the seal on the right features a bald eagle, the national bird and symbol of the United States. Above the eagle is a radiant cluster of 13 stars arranged in a six-pointed star. The eagle's breast is covered by a heraldic shield with 13 stripes that resemble those on the American flag. As on the first US flag, the stars and stripes stand for the 13 original states of the union. The eagle holds a ribbon in its beak reading "E PLURIBUS UNUM", a Latin phrase meaning "Out of many [states], one [nation]", a de facto motto of the United States (and the only one until 1956). Both the phrases "E Pluribus Unum" and "Annuit coeptis" contain 13 letters. In its left talons the eagle holds 13 arrows, and in its right talons it holds an olive branch with 13 leaves and 13 olives, representing, respectively, the powers of war and peace. To the right of this seal, a string of 13 pearls extends toward the edge of the bill. A plate position (check) number is normally found to the left of the eagle.

Except for significant errors, and series 1988A web notes printed in small batches for some of the Federal Reserve districts (web notes from other series are more common), green seal dollars are of little collector value. However, two notes have generated public interest, although neither is scarce.

In 1963 dollar bills were produced for the Eleventh Federal Reserve District, headquartered in Dallas. Since the FRD jurisdictions are sequentially numbered, notes received the corresponding letter "K", for the 11th letter of the alphabet. Some people noticed that the 1963 Dallas note, with the number "11" and a "K" surrounded by a black seal, appeared about the time President John F. Kennedy was shot in Dallas in November 1963. The bill was not a commemorative issue and there was no connection between it and the shooting.

In 1968–69 Joseph W. Barr was Secretary of the Treasury for only 31 days and his signature appeared solely on the 1963B dollar bill. Some collectors thought that his brief tenure might make these notes valuable, but use of their plates continued for some time after his term in office and 458,880,000 were printed. Thus they are very common.

Dollar Bills with interesting serial numbers can also be collected. One example of this is radar or “palindrome“ notes, where the numbers in the serial number are the same read from left to right or right to left. Very low serial numbers, or a long block of the same or repeating digits may also be of interest to specialists. Another example is replacement notes, which have a star to the right of the serial number. The star designates that there was a printing error on one or more of the bills, and it has been replaced by one from a run specifically printed and numbered to be replacements. Star notes may have some additional value depending on their condition, their year series or if they have an unusual serial number sequence. To determine the rarity of modern star notes, production tables are maintained.

Prosecution for the possession of a $1 bill

In Turkey the possession of a one-dollar bill can lead to a prosecution and sentence for terror related charges because it is seen as evidence for being a member of the Gülen Movement founded by Fethullah Gülen, which is seen as a terror organization in Turkey. Turkish authorities believe that Gülen used to present a one dollar bill to his followers and that they showed it to one another in order to make them recognizable.

Redesign or replacement of the dollar bill

In modern times, the one dollar bill is used much more than the dollar coin, despite the U.S. Government's repeated efforts to promote the latter. There are organizations specifically aimed at either preventing (Save the Greenback) or advocating (Coin Coalition) the complete elimination of the one-dollar bill in favor of the dollar coin.

On November 29, 2012, a House subcommittee met to consider replacing the dollar bill. This action took place after the seventh Government Accountability Office report on the subject. The latest report claimed that switching to dollar coins would save $4.4 billion over thirty years. However, according to polls, few Americans want to give up dollar bills. Recent budgets passed by Congress have included provisions to prevent the Treasury Department from spending any of its funds to redesign the one-dollar bill, largely because of potential cost impacts on the vending machine industry.

All content from Kiddle encyclopedia articles (including the article images and facts) can be freely used under Attribution-ShareAlike license, unless stated otherwise. Cite this article:
United States one-dollar bill Facts for Kids. Kiddle Encyclopedia.