Kids Encyclopedia Facts
Not to be confused with Chittenden, Vermont.

The county has most of Vermont's fastest growing municipalities. It is one of the three counties that comprise the Burlington metropolitan area, along with the counties of Franklin and Grand Isle to the north and northwest, respectively. The University of Vermont (UVM), Vermont's largest university, is located in the county, as well as its affiliated hospital, the UVM Medical Center (which is Vermont's largest hospital). Vermont's largest private employer (GlobalFoundries) and largest airport (Burlington International Airport) are in the localities of Essex Junction and South Burlington, respectively. The Vermont National Guard is based at Camp Johnson in the town of Colchester while their Air Guard is based at the Burlington International Airport.

Originally, Chittenden County contained parts of other counties. It included all of today's Franklin, Grand Isle, and Lamoille counties, and parts of today's Orleans, Washington, and Addison counties. 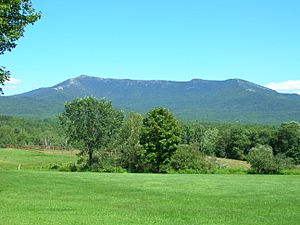 The town of Underhill in Chittenden County is home to the highest summit within the state, Mount Mansfield, which has a peak elevation of 4,393 feet (1,339 m) above sea level.

In 2007, census department estimates that Chittenden had the youngest average age in the state, 37.5. This compares with the actual census in 2000 of 34.2 years.

In 2008, about 29% of the population lives alone. 59% of households consist of families. 38% of men and 35% of women, age 15 or older, have never married. 6% of the population were born in a foreign country, 8% of residents speak a language other than English at home.

From 2000 to 2008, residents left Chittenden in high numbers for places outside Vermont. Still, population increased slightly, in part due to immigration from foreign countries.

In the first national survey by Robert Wood Johnson and the University of Wisconsin in 2010, Vermont ranked the highest in the country for health outcomes. The top county in Vermont was Chittenden.

In Vermont, gores and grants are unincorporated portions of a county which are not part of any town and have limited self-government (if any, as many are uninhabited).

All content from Kiddle encyclopedia articles (including the article images and facts) can be freely used under Attribution-ShareAlike license, unless stated otherwise. Cite this article:
Chittenden County, Vermont Facts for Kids. Kiddle Encyclopedia.