Westford is a town in Chittenden County, Vermont, United States. The population was 2,029 at the 2010 census.

The area that is today described as Westford, Vermont originally fell within the traditional territories of the Sokoki, Missisquoi, and Cowasuck bands of the Western Abenaki tribes. Newly introduced infectious diseases and attacks by English settlers greatly impacted native populations and prompted their emigration to Quebec by the 1670s, opening the land for settlement by European immigrants. The original charter for the Town of Westford was granted at a cost of £20 (equivalent to £2,470 in 2018) by New Hampshire's provisional governor Benning Wentworth on 8 June 1763 as part of a series of what came to be known as New Hampshire Grants. According to Wentworth's grant, six lots were set aside (3 for religious use, 1 for the town's school, and 2 for Wentworth himself) and the remainder of the land was subdivided among the founding residents. Although officially granted simultaneously with Underhill and Mansfield, the description of Westford's territory is recognized as having been set down earlier due to the fact that their territorial boundaries are defined in relation to Westford's. From their founding, both Westford and Underhill shared many of the same grantees, and settlement between the two towns occurred in concert with families such as the Macombers living in Westford but conducting business on Underhill's Mount Macomber.

Governor Wentworth's land grants in the area that is today Vermont were considered controversial at the time and since the early 1750s New York, which also laid claim to the area, had challenged the validity of town charters granted by Wentworth. Between 1764 and 1770, in a series of legal decisions handed down by England's Board of Trade and the New York Supreme Court of Judicature, New York was found to be the proper jurisdictional body for the area and Wentworth's charters were invalidated. New York immediately began redistricting the area by land patent, putting Westford within the now-extinct Charlotte County (formed 1772), and requiring residents to repurchase their land from New York in order to retain legal title. The residents of Westford (together with residents of the other New Hampshire Grant towns) protested this ruling and petitioned New York for the confirmation of Wentworth's town grants. In response New York declared that it would halt further subdivision of settled areas until clarification of King George III's intent was made clear. Before such clarification could be made, the American Revolutionary War (1775) interrupted matters and shortly afterward in 1777, Vermont seceded from New York and England to form the Republic of Vermont. New York's redistricting was forgotten and Westford solidified its position as a town within Vermont's western County of Bennington (founded in 1779, and later splitting the area containing Westford into Rutland in 1781, Addison in 1785, and ultimately Chittenden County in 1787). Westford would remain part of Chittenden County during the state's 1791 entrance to the United States as its 14th state and through to the present. 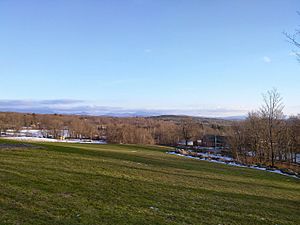 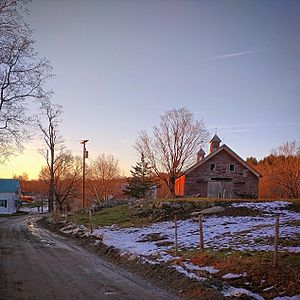 Westford is in northern Chittenden County, bordered by Franklin and Lamoille counties to the north. According to the United States Census Bureau, the town has a total area of 39.3 square miles (101.8 km2), of which 39.1 square miles (101.2 km2) is land and 0.19 square miles (0.5 km2), or 0.53%, is water. Prominent waterways include Westford Pond, Pond Brook, Rogers Brook, and the Browns River (on the east), as well as Morgan Brook (in the town's center) and Beaver Brook (in the northeast near Cloverdale). The town has a number of named hills including those named after prominent families (e.g. Duffy and Stewart), and others named descriptively (e.g. Oak, Beech, Spruce, Bald, and Prospect). In her bicentennial work, Vermont Place-Names, historian Esther Munroe Swift suggests that some of the more abstract names of Westford's hills may closely reflect the sentiments of the original English settlers. Swift notes that the process of subdividing down to individual lots was often done in stages with the first few lots representing land suitable for dwellings and tillage, the second group of lots representing pasture land, and the third group representing land suitable only for logging. Swift points to hills like Westford's Number Eleven Hill (never renamed from its original lot number) and Jack Lot Hill as examples of hills whose names reflect the dissatisfaction of their owners with the quality of land.

The Town of Westford contains two villages: Brookside (centered in the bend of Rogers Brook along Maple Tree Lane and Brookside Road), and Westford (commonly known as Westford Center and centered on the Westford Commons). Smaller communities including the Hamlet of Cloverdale (located near Vermont Route 15 in Westford's northeast corner) and the historic Mill Brook community (shared between Westford and Fairfax to the north) have also been established in connection with periods of economic development.

There were 757 households out of which 37.3% had children under the age of 18 living with them, 8.1% had a female householder with no husband present, and 24.2% were non-families. The average household size was 2.68 and the average family size was 3.00.

All content from Kiddle encyclopedia articles (including the article images and facts) can be freely used under Attribution-ShareAlike license, unless stated otherwise. Cite this article:
Westford, Vermont Facts for Kids. Kiddle Encyclopedia.