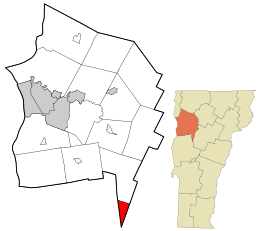 Location in Chittenden County and the state of Vermont

Buels Gore is a gore in Chittenden County, Vermont, United States. The population was 30 at the 2010 census, up from 12 at the 2000 census. In Vermont, gores and grants are unincorporated portions of a county which are not part of any town and have limited self-government (if any, as many are uninhabited).

Buels Gore is located at the southern tip of Chittenden County, bordered by the town of Huntington to the north, Fayston in Washington County to the east, and Starksboro in Addison County to the west. The crest of the Green Mountains, followed by the Long Trail, runs through the eastern side of the gore, and Vermont Route 17 crosses the gore from east to west, cresting the mountains at Appalachian Gap.

The name in history

The gore was chartered by the Vermont General Assembly on November 4, 1780. It is named for Major Elias Buel (in some references "Buell") who moved to Vermont from Coventry, Connecticut. With a group of would-be proprietors including Ira Allen and several Buel family members, the group petitioned the legislature for a grant. They received a grant for a town, intended to be called "Coventry" near Shoreham. Due to a surveying error there was almost no land left in the grant. The group returned to the legislature and received a "flying grant", a sort of license which allowed a grant to be made on uncharted land that could be identified. As much of the state had by now been organized, they finally settled upon three unconnected pieces of land. The largest became the present town of Coventry in Orleans County. A second piece near Coventry was named "Coventry Leg" for its appendage shape. Coventry Leg was annexed to Newport in 1816. The final small piece, adjacent to Huntington, was called "Huntington Gore", and renamed "Buels Gore", despite Major Buel's desire to call it "Montzoar". All three charters were issued in October 1788, though dated back to 1780, the year of the original petition. Buel was charged retroactive taxes on the grant, a debt that only resolved by sale of all of his lands. He left Vermont to settle in New York.

There were 6 households out of which 16.7% had children under the age of 18 living with them, 66.7% were couples living together and joined in either marriage or civil union, and 33.3% were non-families. 33.3% of all households were made up of individuals and none had someone living alone who was 65 years of age or older. The average household size was 2.00 and the average family size was 2.50.

All content from Kiddle encyclopedia articles (including the article images and facts) can be freely used under Attribution-ShareAlike license, unless stated otherwise. Cite this article:
Buels Gore, Vermont Facts for Kids. Kiddle Encyclopedia.