Williston is a town in Chittenden County, Vermont, United States. Originally rural and laid out with many farms, in recent decades it has developed into a thriving suburb of Burlington, the largest city in the state of Vermont. As of the 2020 census, the population of Williston was 10,103, an increase of over 1,000 people since the 2010 census. Williston is one of the fastest-growing towns in Vermont, and while becoming more populated, it has also developed as a major retail center for the Burlington area as well as much of central and northern Vermont. The town contains the village of Williston, which is unincorporated.

The town was named for Samuel Willis, a landholder.

During the night of July 7, 1984, an Amtrak train with 287 people aboard hit a landslide and derailed, killing five people and injuring about two hundred. Although the accident triggered one of Vermont's most intensive emergency responses, the final victims were not rescued until the end of the day.

A private, boarding high school, Pine Ridge, was founded in 1968 to serve learning-disabled students. It closed in June 2009.

Allen Brook drains the center of the town. It begins and flows from Mud Pond north to the village of Williston, and then in a northwesterly direction where it meets the Winooski River. It has a length of 10 miles (16 km) and drains a watershed covering 6,900 acres (2,800 ha).

There were 2,921 households, out of which 36.8% had children under the age of 18 living with them, 65.1% were married couples living together, 5.3% had a female householder with no husband present, and 26.7% were non-families. 20.4% of all households were made up of individuals, and 7.9% had someone living alone who was 65 years of age or older. The average household size was 2.59 and the average family size was 3.02.

Bus service is provided by Chittenden County Transportation Authority. This transportation brings residents and workers to South Burlington and Burlington, the central locations of the bus system.

Interstate 89 passes through town from east to west, though it is signed north-south. There is an interchange just south of downtown.

U.S. Route 2, also known as Williston Road, passes through town from east to west. Williston's historic village is located along U.S. 2 in the center of town.

Vermont Route 2A provides a north-south route through town, connecting it to Hinesburg and Essex Junction. Much of the town's retail development, including nearly all of its big-box stores, is located along Route 2A, which runs through the western part of Williston and intersects I-89 and U.S. Route 2.

One measure of economic activity is retail sales. Williston led the state in 2007 with US$434.8 million. The part of town known as Taft Corners has a number of big-box stores, including Walmart, Home Depot, Bed Bath and Beyond, Petsmart, Staples, Old Navy, and Best Buy, as well as chain restaurants not seen elsewhere in Vermont such as Friendly's, Texas Roadhouse, Longhorn Steakhouse, and Ninety-Nine. Additionally, U.S. Immigration and Customs Enforcement operates a large law enforcement center in the town.

The Vermont Department of Corrections was headquartered in the White Cap Business Park in Williston now back in Waterbury. 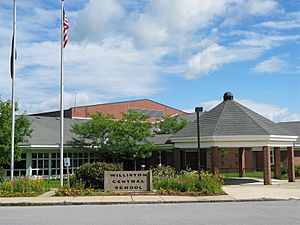 The Williston school district is part of the Champlain Valley School District. It therefore sends its students of high school age to Champlain Valley Union High School, which it supports through taxation.

All content from Kiddle encyclopedia articles (including the article images and facts) can be freely used under Attribution-ShareAlike license, unless stated otherwise. Cite this article:
Williston, Vermont Facts for Kids. Kiddle Encyclopedia.