Winooski is a city in Chittenden County, Vermont, United States. Located on the Winooski River, as of the 2020 U.S. Census the municipal population was 7,997. The city is the most densely populated municipality in northern New England, an area comprising the states of Maine, New Hampshire and Vermont. It is the smallest in area of Vermont's nine incorporated cities. As part of the Burlington, Vermont metropolitan area, it is bordered by Burlington, Colchester and South Burlington.

As early as 750 AD, the Abenaki tribe lived along the shores of a cascading waterfall in a fertile river valley they called "winoskitegw," meaning “land of the wild onion.” Winooski's southern border is formed by the Winooski River, which is alternatively known as the Onion River.

Five thousand years ago a single family of paleolithic Native Americans came to what is now the city. The prehistoric campground for this transient group is one of Vermont's significant archaeological sites. Other native people came to Winooski in the years that followed.

Situated on a main road, Winooski most likely started as a rest stop for travelers. With a set of waterfalls to assist the growth of industry, however, it soon also became a center for wool processing.

In the early 1770s Ira Allen constructed a blockhouse on the Winooski (then "Onion") River which served both as a fort and as general store and office for the land-speculating "Onion River Company." "Fort Frederick" was never used for defense, but its presence increased the value of Onion River property and promoted settlement.

After the Revolutionary War, Ira Allen built a dam across the river with a sawmill at each end.

In the late 1830s the Burlington Mill Company used the river's power for the manufacture of yarns and cloth.

In 1846, James and Lucinda Stone from Winooski settled in Sheboygan County in the Wisconsin Territory and named their new settlement Winooski, Wisconsin.

The American Woolen Company purchased the failing Burlington Mills in 1901 restoring a measure of economic growth to the area. This success eventually led Winooski to incorporate as a city in 1922, breaking away from the town of Colchester.

The mills closed in 1954, resulting in two decades of economic problems for the city. In the 1980s, two old mills were converted into commercial, office, and apartment space, helping to revitalize the area.

In 1979, the city researched the construction of a dome over the entire city of Winooski, to reduce heating costs during the winter. The proposed dome would have been 200 feet (61 m) at the center, and internal combustion engines would have been banned. Though the dome was never built, to this day the city's planner defends the concept, insisting "Economically, it's a slam dunk," and adding "You could have had year-round fly-fishing."

In 2008, the city dismissed their city manager of 11 months, while he was still an "at-will" employee. His contract had been scheduled for three years.

There were 3,252 households, of which 24.2% had children under the age of 18 living with them, 34.4% were couples living together and joined in either marriage or civil union, 11.2% had a female householder with no husband present, and 50.2% were non-families. 36.8% of all households were made up of individuals, and 12.2% had someone living alone who was 65 years of age or older. The average household size was 2.21 and the average family size was 2.98. 14.4% of the city's total population was born outside of the United States. 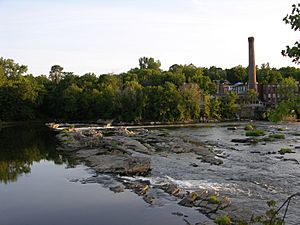 Mill and falls in Winooski 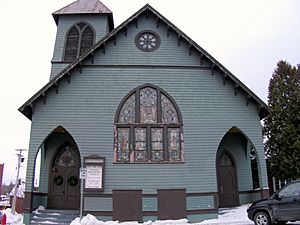 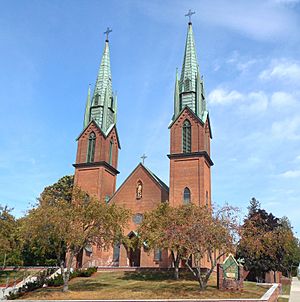 All content from Kiddle encyclopedia articles (including the article images and facts) can be freely used under Attribution-ShareAlike license, unless stated otherwise. Cite this article:
Winooski, Vermont Facts for Kids. Kiddle Encyclopedia.