Charlotte is a town in Chittenden County, Vermont, United States. The town was named for Sofia Charlotte of Mecklenburg-Strelitz, Queen of Great Britain and wife of King George III. The population of the town was 3,754 at the 2010 census.

Charlotte is located in the southwest corner of Chittenden County. It is bordered to the north by the town of Shelburne, to the east by Hinesburg, to the southeast by Monkton in Addison County, and to the south by Ferrisburgh in Addison County. To the west the town extends to the New York/Vermont border in the middle of Lake Champlain. According to the United States Census Bureau, the town has a total area of 50.3 square miles (130.4 km2), of which 41.3 square miles (106.9 km2) is land and 9.1 square miles (23.6 km2), or 18.08%, is water.

Charlotte is home to 990-foot-high (300 m) Mount Philo, within the state's first and most frequently visited state park. The park was established in 1924 and is open seasonally. 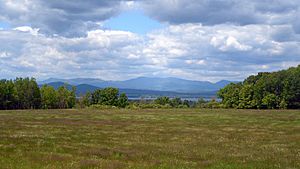 There were 1,287 households, out of which 42.6% had children under the age of 18 living with them, 66.7% were married couples living together, 6.9% had a female householder with no husband present, and 23.0% were non-families. 15.7% of all households were made up of individuals, and 4.3% had someone living alone who was 65 years of age or older. The average household size was 2.77 and the average family size was 3.12.

Ferry service between Essex, NY and Charlotte, VT is provided by the Lake Champlain Transportation Company Most years in the past decade the ferry service has run year-round with exception of a few days of winter rough or ice filled lake surface. A commuter bus operating morning and evening stops on Rte 7 at Ferry Road for transport to and from Burlington.

All content from Kiddle encyclopedia articles (including the article images and facts) can be freely used under Attribution-ShareAlike license, unless stated otherwise. Cite this article:
Charlotte, Vermont Facts for Kids. Kiddle Encyclopedia.