Shelburne is a town in Chittenden County, Vermont, United States. Located along the shores of Lake Champlain, Shelburne is a suburb of Burlington, the largest city in the state of Vermont. Shelburne's town center lies approximately 7 miles (11 km) south of Burlington's city center. As of the 2020 census, the population of Shelburne was 7,717.

The main settlement of Shelburne in the center of town is a census-designated place (CDP), with a population of 6,178 at the 2020 census. The town is the wealthiest municipality in both Chittenden County and the Burlington, Vermont metropolitan area.

Shelburne was chartered by New Hampshire, August 18, 1763, to Jesse Hallock and 64 associates by Governor Benning Wentworth. The name "Shelburne" or "Shelburn" was chosen to honor William Petty, 2nd Earl of Shelburne, a celebrated nobleman of the British Parliament and Prime Minister. According to the charter, the town was to have an area of 23,500 acres (95.1 km2), or a tract a little over 6 square miles (15.5 km2), but owing to a blunder on the part of the surveyors, it was shorn of a large portion of its possessions.

From the beginning, Shelburne's economy was based on farming. With the clearing of land and burning of logs the town experienced a potash boom. A carding and fulling mill, a gristmill, a sawmill, and a blacksmith shop were erected on the La Platte River at Shelburne Falls. In 1811, a few Merino sheep imported from Spain led to an upsurge in sheep raising. Orchards and fruit growing became a major source of income for the farmers, with some 17,740 trees in 1880. Following the War of 1812, commerce on the lake expanded rapidly.

The Lake Champlain Transportation Company established its shipyard at Shelburne Harbor and launched its first steamboat, the General Green, in 1825; this was followed by ten others before the Ticonderoga in 1906. In 1955, the Ticonderoga was moved overland to the Shelburne Museum, where it is now on display.

There were 2,632 households, out of which 37.6% had children under the age of 18 living with them, 61.3% were couples living together and joined in either marriage or civil union, 6.7% had a female householder with no husband present, and 29.9% were non-families. 22.9% of all households were made up of individuals, and 11.7% had someone living alone who was 65 years of age or older. The average household size was 2.58 and the average family size was 3.08. 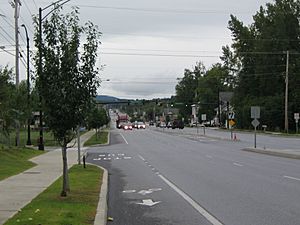 The "Strip" in the Shelburne business district (Shelburne Road) 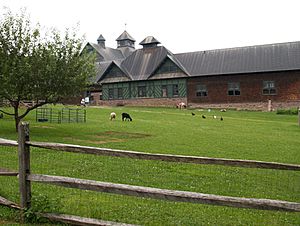 The town contains businesses, including manufacturers, service providers, retail establishments and the state's largest continuing care retirement community. In 2007 a historic inn was converted into a mixed use array of offices, small retail, and a restaurant.

The town maintains a beach on Lake Champlain which has a boat launch and nature park.

The "Strip" in the Shelburne business district (Shelburne Road)

All content from Kiddle encyclopedia articles (including the article images and facts) can be freely used under Attribution-ShareAlike license, unless stated otherwise. Cite this article:
Shelburne, Vermont Facts for Kids. Kiddle Encyclopedia.